Hello eltonites!!! For the "Live" week I have to bring on a very special guest. She's from U.K.. Ladies and gentlemen: Rocketwoman!! Hi Rocketwoman, thank you very much for the acceptation. Elton has been touring since 1970 in most countries of the world, most venues, most formats of the show, great bands... let's talk a little about it all...

But first of all… Could you tell us, more, who are you and where are you from?

I am Olwen Teasdale (Rocketwoman) and I come from Durham which is in the North East of England. I have been married to Jeff for over 34 years and have three grown up children. Jeff is the one who drives me all over the place to see Elton and has become almost as big a fan as I am. I work in the local Primary school as a Teaching Assistant.

I can't actually remember when I first heard Elton's music but it must have been around 1972 when I first became an 'Eltonite'. There was just something about his music that I really liked. The first album that I bought was 'Goodbye Yellow Brick Road', it was amazing. I then started to buy all of his previous albums and loved them too. I have of course bought all of his albums since then and am still amazed at the lyrics, the music and the voice. I can't imagine ever not wanting to buy or listen to Elton's music it really cheers me up if I am feeling a bit down.

The first time I saw Elton live was in December 1973. It was so exciting knowing I was going to actually see him in concert. The concert hall held about 2000 seats and I was about 5 rows from the front. It was amazing just knowing that I was in the same room with him. All I know is that when the concert was finished I just wanted to go again and again to see him live. I must have seen him over 30 times (I have never counted) and am seeing him 5 times this year. I have never been in contact with him or spoken to him really although I have shouted things to him at concerts and had 'Thank you' shouted back which is unreal. I have had concert tickets, programmes and my Captain and the Kid CD signed by him at concerts.

Great!!! Which could be a great set list, in your opinion? Is there any song that Elton hasn’t played yet, and you think that he should do it? And you prefer the Elton’s solo tours or better with band? With the same musicians as his current band or you miss someone of the past?

For me I really love to hear 'Funeral for a Friend'/'Love Lies Bleeding' at the beginning of his concerts and 'Your Song' at the end. I also love him to sing 'I Guess That's Why They Call it the Blues'. Other songs I would like to hear are Skyline Pigeon, Harmony, Freaks in Love, Teacher I Need You, Just Like Belgium, Club at the End of the Street, The North, Captain Fantastic and the Brown Dirt Cowboy, Mona Lisas and Mad Hatters, Tinderbox, Empty Garden, Rocket Man, I'm Still Standing, Are You Ready For Love, Bite Your Lip (Get Up and Dance), The Bitch is Back, Tiny Dancer, Hercules, Blues For Baby and Me, Original Sin. I am sure that if you ask me this question again tomorrow you will get a different answer.

I have seen Elton's solo tours and loved them. He played some songs that you don't normally hear in the concerts with the band. It is a while since I saw Elton solo so I would love to go to another solo concert. Although it is fantastic to just see Elton and hear some different songs the concerts with the band are fantastic. I really think he has the best band membere ever. I do however miss Dee Murray and Ray Cooper. The 'Single Man' tour where Elton played solo for part of the concert and Ray Cooper joined him for the other part was absolutely brilliant. There is no-one quite like Ray.

This might sound silly but I really love the burst balloon that I was sent last year from two other Eltonites who were at the Red Piano show in London (Thanks Pink Rocket and A Single Man) which I was unable to go to. I also appreciate the things that I have had signed by him. Some of the signatures are a bit unclear but I know who wrote them and I know that Elton actually had my things in his hands so they are very precious to me. I also have a fantastic Elton photo frame that I got from another eltonjohn.com forum member that you might have heard of Mary. She sent it to me and it was a wonderful surprise. And the pictures I got from old76 are also some of my most prized Elton things.

Elton was a big star in the U.S. in the 70s, and in the U.K. did well. While “Don’t Let The Sun Go Down On Me” was number 2 in the US, was number 16 in UK; while Elton had 7 consecutive number one albums in american charts, in the UK were only four? Other while, in the 90s Elton had number Top 5 in UK while in America they rarely enter the Top 10... Why that difference?

I don't really understand why Elton hasn't had as much chart success here in the UK as he has had in USA. When you see him in concert there is a lot of real genuine fans and love for him so I don't know why his chart positions are not as good here. America really took him to their hearts though so it is hardly surprising that he has done so well there.

OK! What do you think about next step Elton should do? Recording an album with new material? Doing more musicals? When he should be retired?

I hope there is more albums to come, I can't see him not ever releasing another one. As to doing more musicals if they are as good as Billy Elliot then I say yes, do more please. I can't see Elton retiring either, I think he lives to work and wouldn't know what to do with himself if he retired altogether. I am not sure if he will be able to keep up this pace though for much longer, he makes me tired just thinking about what he does. 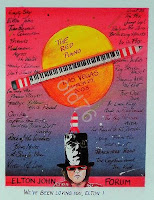 Skyline Pigeon, I Guess That's Why They Call it The Blues, Freaks in Love, Harmony, Funeral For Friend/ Love Lies Bleeding. The first two are always there but the other change sometimes.

I would just like to say that I have made loads of friends on the eltonjohn.com forum and have even met some at concerts and hope to meet even more. Elton has brought together people from all over the world who appreciate him and his music. He is a special person.

Thanks a bunch, Olwen. Really a pleasure to chat with you. I get funny doing this interview with you, it was an enjoyable and worth experience.Thank you very much. Take care.
by Jackrabbit on 2:02 am