Considered one of the most influential pop music journalists of all time, Robert Hilburn wrote for the Los Angeles Times from 1960 until his retirement in 2005. He is on the nominating committe of the Rock and Roll Hall of Fame.

Elton John had made his U.S. debut at a legendary six-night sold-out run at Los Angeles’ famed Troubadour club in late August of 1970. After the first night, Robert Hilburn, music critic for the Los Angeles Times, wrote: “Tuesday night at the Troubadour was just the beginning. He's going to be one of rock's biggest and most important stars". And added: "He has, to be sure, borrowed from country, rock, blues, folk and other influences, but he has mixed them in his own way. The resulting songs are so varied in texture that his work defies classification... While his voice most often resembles Jose Feliciano, there are at times touches of Leon Russell and Mick Jagger... John's songs are co-written by lyricist Bernie Taupin, whose lyrics often capture the same timeless, objective spirit of the Band's Robbie Robertson... Beyond his vocals, melodies and arrangements there is a certain sense of the absurd... that is reminiscent of the American rock stars of the mid-1950s...". 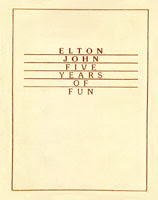 Commemorating the 5th anniversary of Elton's American debut at the Troubadour, Hillburn's released a fully-illustrated account of Elton's superstar status after only five years of performing his hits. The book was issued as a souvenir at Doug Weston's Troubadour in Los Angeles, August 25-27, 1975.

One of his favourite rock and roll trips, was Elton John in Russia in 1979, that was the first time a Western rock star performed in the Soviet Union. He reminded when "in his third floor dressing room after the show, Elton heard the chanting of thousands of fans in the street below. At first he thought they were fans from the show, but he learned that they couldn't get tickets (most of which went to Communist Party VIPs). They had come just on the hopes of seeing him. He was touched more by this affection by the strong audience response to the actual performances".

In Hillburn's interview in 1992 titled "Elton John on His Days Of Drugs and Despair", he got an emotional and sincerely confidence by Elton: "Despite all the success, I think I just wanted to be loved," he said finally. "I wanted someone to love me."
by Jackrabbit on 1:59 pm

This is very inspiring work you have created for us. Some people need to know that these things can ensue to anyone. You have shown me a better view now.