The Story Behind "Crazy Water" 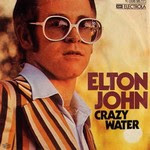 The up-tempo contemporary jazz number had the Bernie's most inspired lyrics from the whole album, containing some of his most enigmatic references to marital discord. He likens his separation from his wife Maxine, the result of his rock's unsettled life, to the separation between "shoreline widows" and "missing whalers", and the "crazy water" that comes between two who should have been together.

The Californian girl who Bernie met in 1970 and married one year later, divorced in 1975 and begun a relationship with Kenny Passarelli, then Elton's bass player.

Bernie described in "Between seventeen and twenty" the sadness of an ending marriage. The title refers at the age Bernie and Maxine had when they married. And Kenny was the friend who Bernie "knew so well" (as he said in the lyrics). Instead of the trio love affair, Bernie and Kenny remainded good friends, after all.
by Jackrabbit on 3:24 pm