Elton John was invited at a star-studded dinner honoring the Queen of England at 20th Century-Fox Studios in Los Angeles. Hundreds of Hollywood personalities came out to honor Queen Elizabeth II and Prince Phillip during their southern California visit.

British millionaire pop singer Elton John wore a straw hat and a perched parrot earring plus the world's most expensive pair of eyeglasses as he performs at a gala evening in Monastir, a resort on the southern Tunisian coast. The spectacles, which include a 22-carat gold frame and a diamond encrusted bridge, were reported to be valued at $14,000 US. They were presented to him by the Paris jewelry house of Cartier which is promoting a new line of luxury spectacles. 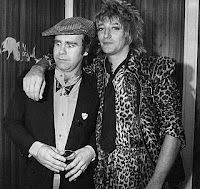 Elton revealed plans for a joint tour with Rod Stewart: "We've been working together to produce a special show which will go on tour next summer" explained about the project, while Rod was saying: "We're going to be playing lots of great material that we have never done before. Lots of old Motown and soul things (...) Elton and I really are getting on like a house of fire" declared to The Sun.

"Too Low For Zero" was released. At the insistence of Taupin, Elton decided to go back to basics and returned to working with Taupin full time. Elton also reunited with the core of his backing band of the early 70s: Dee Murray, Nigel Olsson and Davey Johnstone as well as Ray Cooper, Kiki Dee and Skaila Kanga (who played harp on Elton John's Self-titled album). The album was produced by Chris Thomas and recorded at Air Studios in Montserrat and Sunset Sound Recorders in Hollywood. The original LP issue of the album featured a die-cut cover with a special inner sleeve. The four shapes shown on the cover were cut out, with the colours (shown as ink smears on the inner sleeve) showing through the holes

Elton arrived Peking with Watford FC for a three matches tour of China. The team played and won the three matches against the chinese national soccer team. John Barnes, Ross Jenkins and Luther Blissett were some of the most respected players in the English game during the 1980s. One of those nights, althought he promised not to sing, Elton took to the piano and sang not for a multitude but for his team. Elton John also had time to play a ping pong match with a 13-year-old Li Dequn, on June 1, 1983 in Peking. The towering rock star was beaten 0-2.

Elton played 8 nights at the Sun City Casino, in South Africa, starting October 7 and finishing October 15. It was said that Rod Stewart gonna share the stage with him but finally it didn't happen.

The plans of Elton and Rod tourin' together had been called off. Elton was very upset: "We're supposed to be friends but I haven't heard from Rod for ages, he ehasn't phoned me, but I've had a telex and it seems to be all off".
by Jackrabbit on 11:27 am