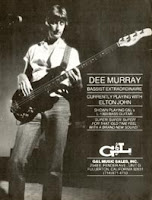 Dee Murray, aged 45, died in Nashville, leaving behind a wife and three children. Dee was diagnosed eight years before with malignant skin cancer. He was being treated for the cancer when he suffered a stroke. After the stroke, he was taken to Vanderbilt University Medical Center, where he died. In the late Eighties, Dee moved to Nashville, where he embarked upon a career in the country music scene.

The Elton John AIDS Foundation (EJAF) was established in the United States in 1992 by Sir Elton John. EJAF's U.S. office is located in New York City. Since its founding, EJAF has raised over $125 million to support worthy programs in 55 countries around the globe. EJAF is the largest HIV/AIDS grant maker in the UK and one of the 20 largest international AIDS charities which focuses on supporting community-based HIV/AIDS prevention education programs, harm reduction programs, and direct services to persons living with HIV/AIDS, especially populations with special needs. He also announced his intention to donate all future royalties from sales of his singles in the U.S. and UK to AIDS research. In 1993, Sir Elton also established the Elton John AIDS Foundation (EJAF-UK) in the United Kingdom, headquartered in London.

Elton joined Sting on a benefit concert for "The Rainforest Foundation", a group set up by Sting to generate popular interest in preserving 72,000 square miles of Brazilian jungle from logging and farming. Other performers included Don Henley, Natalie Cole and James Taylor. Elton covered "I Put A Spell On You", "He'll Have To go", "Will You Still Love Me Tomorrow" and "Someday He'll Come / The Man I Love".

Elton performed two tribute concerts at the Grand Ole Opry, in Nashville, Tennessee to raise money to support Dee Murray’s family. He closed with a slow version of "That's What Friends Are For" as photos of Dee flashed on a screen behind him. 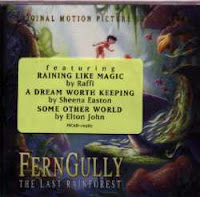 "FernGully: The Last Rainforest" was an animated feature produced by Kroyer Films, presented by FAI Films and released by 20th Century Fox on April 10, 1992. It was adapted from a book of the same name by Diana Young. The ending song of the soundtrack album "Some Other World" was written and performed by Elton John with lyrics by Bruce Roberts.

"Concert For Life" was a concert tribute for Freddie Mercury, who died of AIDS, took place at Wembley Stadium in London. Elton's first idea, along with rest of Queen members, had been expanding to other artists. Appearing towards the end of the show, Elton duetted with Axel Rose on "Bohemian Rhapsody" and with a emotional rendition of "The Show Must Go On".

Rehearsals of the new world tour began with Davey Johnstone in his new role of official musical director.

The One Tour started in Norway. The tour began May 26 in Oslo, Norway and finished on July 21 in Barcelona, Spain, on the eve of Olympic Games.

Elton John Day on Radio One, including an exclusive interview with Steve Wright.

Releases "The One", his best album since "Captain Fantastic", in Elton's words. It was his first release since completing rehab, which found him drug free and sober.

Concerts with Eric Clapton sharing the top of the bill alongside with Elton.

Drummer Jeff Porcaro suffered a heart attack and died. He was using a pesticide in his yard and an allergic reaction to the substance triggered the attack. An autopsy revealed a serious heart condition that had been previously undiagnosed. Porcaro co-founded the immensely popular group TOTO.

The North American leg of "The One" tour started in Atlanta, GA on August 11 and finished on November 14 in Mexico, after 52 shows. A planned follow on through South America was finally cancelled.

Guns'N'Roses paid tribute with the song "You Could Be Mine" thanking Elton and Bernie in the credits. Looking at the lyrics, they get mentioned with regards to the "Cause I think we've seen that movie too" line. Also, Axel Rose has used the chorus of "The One" as an intro of "Sweet Child Of Mine" in concert. Elton joined Guns'N'Roses at the MTV Music Awards, recent 9 september, playing piano on "November Rain".

Trey Lorenz in his self named album, debuted a song called "Photograph Of Mary", written with Elton and Bernie, along with Seth Swirsky.

Elton appeared at "To Give Is To Love Concert Benefiting the Elizabeth Taylor Aids Foundation" show in Madison Square Garden, New York. Other performers that night included George Michael, Lionel Richie, Bruce Hornsby, and Whoopi Goldberg. Elton duetted "Lost Soul" with Hornsby, "Imagine" with Richie and "Jumping Jack Flash" with Goldberg, and performed some of his songs like "Empty Garden" and "Funeral For A Friend / Love Lies Bleeding". George Michael paid tribute to Elton singing "Candle In The Wind" and "Ticking". 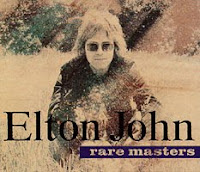 Release of "Rare Masters", a compilation album featuring B-sides and outtakes recorded between 1968 and 1976. Most of the selections on this 37-track double-disc compilation were indeed rare. They were issued on non-LP singles, B-sides, the Friends soundtrack, one-offs; some were buried on album tracks, and some even stayed in the vault.

Elton and Bernie signed a record-breaking publishing deal with Warner/Chappell Music for an estimated $39 million in L.A. obtaining the right to administer all of their post-1974 material plus songs from Elton's next four studio albums. Over the course of the next 12 years, the publishing company would deduct its advance from the John-Taupin portion of the royalties until the $39 million figure is paid off.

Bernie produced an all-star performance of the music from West Side Story as an AIDS project benefit in L.A. It featured artists like Barbra Streisand, Lyle Lovett, Patty Austin, Billy Joel, Liza Minelli, among others. Elton gave a praised performance of "I Feel Pretty".

Elton cancelled concerts in Chili and Brazil due to exhaustion after two shows in Buenos Aires, Argentina.
by Jackrabbit on 2:00 pm