The Too Low For Zero Tour started in New Zealand, Australia and Hong Kong. The tour began February 19 in Christchurch, New Zealand and finished on March 31 in Hong Kong, after 24 shows.

"Maybe you're still standing but we are all on the fucking floor" was Rod Stewart reaction when he knew the notice. Elton married Renate Blauel in an Anglican church, St. Marks Church, in the Sydney suburb of Darling Point, and it was a traditional white wedding. A hundred of wedding guests were specially flown from Britain and America. Renata, a german sound engineer, met Elton in Montserrat, while recording "Too Low For Zero"'s 1983 album. She had engineered albums before, including "Hysteria" for the Human League and for Croatia Records, the largest major label record label in Croatia. John Reid and Bernie Taupin were their best man. A 100,000 reception at Sebel Town House Hotel followed. A second service was held for John's family members later in England.

Linda Woodrow (then Sawford) told the Sunday Mirror about Elton early days when he was Reg Dwight. They had been together for 18 months at the time, Linda was sure she had found the right man for her. After the split, Linda used the interview to say how terrible their relationship had been. "He didn't show much interest in me sexually and didn't pay me very much attention. We didn't have sex very often. But I just thought that was the way it was at the time."

A dozen anti-apartheid demonstrators staged a protest outside the Auckland hotel were Elton was staying. They were angry over his decision to perform in 1983 in Sun City, SouthAfrica. 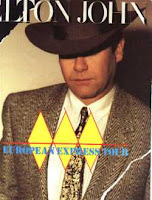 The European Express Tour, included Yugoslavia, Hungary, Czechoslovakia and Poland. The tour began April 17 in Sarajevo, Yugoslavia and finished on June 25 in Birmingham, UK after 50 shows.

The Solidarity leader Lech Walesa was Elton's guest at the gig he did in Gdansk, Poland. 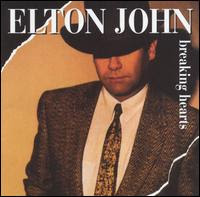 Elton recorded "Breaking Hearts" album in Montserrat. It was recorded at Air Studios, Montserrat and 301 Studios, Sydney, Australia. "Sad Songs (Say So Much)" was the record's high-charting hit. Another great songs were "In Neon", a pleasant countryish song with lyrics, perhaps a paen to the trappings of fame -or the lack of it- in the shimmering city of Hollywood and "Slow Down Georgie", which described the situation of a friend who's in love with the wrong kind. Credits: Elton John (vocals, keyboards); Davey Johnstone (vocals, guitar); Dee Murray (bass, background vocals) and Nigel Olsson (drums, background vocals).

Daily Mirror reported Elton bought a green and white Sydney tram complete with electrodes for his garden of his Windsor home. 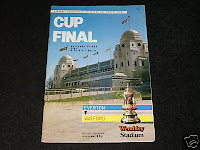 Elton and his wife Renata went to Wembley Stadium for the Cup Final between Watford FC and Everton FC. During the traditional pre-match ritual of the crowd singing "Abide With Me", Elton burst into tears. Watford finally lost the game 2-0 to Everton: despite dominating possession Everton were unable to carve open many clear-cut openings in the early stages but they made the breakthrough in the 37th minute. One famous banner captured by the cameras said: “Sorry Elton, I Guess That’s Why They Call Us The Blues”. For WATFORD: Steve Sherwood, David Bardsley, Neil Price, Les Taylor (cpt), Steve Terry, Lee Sinnott, Nigel Callaghan, Mo Johnston, George Reilly, Kenny Jackett, John Barnes.

"The Summer Of '84 Concert", placed on the Wembley Stadium, London, it was a current festival at that time. Elton was top on the bill, along with, Paul Young, Kool And The Gang, Nik Kershaw and Wang Chung. The concert was broadcast on Radio One.

Sasson Industries, an apparel maker, who promoted one leg of Breaking Hearts tour in 1984/1985, rushed onto the air with a $5 million television campaign featuring Elton. The commercial, shot in Australia and recut in New York, was a rock video with Elton warbling that “Sasson’s Say So Much”. The video for the song and the commercial were all but identical except for length and that one line. The promotional campaign of the jeans did not last very long, although a rare and limited edition picture disc of the single was issued by the designer to help further promote his wares.

Elton cancelled the sell-out concert in Charlotte, North Carolina, after collapsing in his dressing room. A virus afection was diagnosed.

On the BBC Sports Personality of the Year, Elton presented the 1984 award to Jayne Torvill and Christopher Dean. It was the first time it has been awarded jointly to more than one person. At the 1984 Winter Olympics the pair became the highest scoring figure skaters of all time (for a single programme) receiving twelve perfect 6.0s, including artistic impression scores of 6.0 from every judge.

Catherine Britt was born and raised in Newcastle on Australia's eastern coast, where she fell under the spell of country music while still a young child.
by Jackrabbit on 1:52 pm