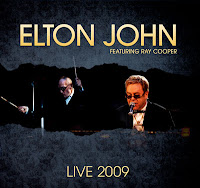 Hello Experts!!! Hello Eltonites!!! Tuesday 22, September. Ahhhh!!! Elton finally reunite again with percussionist Ray Cooper. That deserves an expert committee analysis. Well, as you all know, Elton joined Ray Cooper for six nights in 1977 at the Rainbow Theatre in London. Then it was “A Single Man” Tour and finally they revived the tour in 1993. The show was unique for the time: a pianist and a percussionist. More than this, the set list was plenty of obscure songs from Elton’s catalogue. Anyone attended that shows, experts?

"I was at one of the Rainbow shows in 1977 and I also attended one of the "A single Man + Ray Cooper" shows at the Theatre Royal in London, these shows were unique and did provide a great set list, with songs that would not normally be performed live" starts Ian. Yes, Laurent: "I saw EJ & Ray Cooper for the first time in 1994, at the Zenith in Paris and it was so fantastic ! and it was the world première of "Believe" !!" Sure. Ahhh! What a beatiful song solo live!!! Wim: "I think this kind of concerts are the ultimate concerts for his fans. The first time I saw Elton on Television was the 1979 "A Single Man Tour" concerts it was broadcasted on dutch television. I think it was the Russia concert. Elton and Ray gave that year also three concerts in Holland. Then I was 14 years old. And just became fan of his music. And what is so special on those concerts that they can play so good together. A good example is the concert they gave in 1994 for Disney Channel broadcast: Live At The Greek Theatre in Los Angeles. This is in my opinion the best concert of Elton John, great percussion, great piano they were in good shape and they played songs he plays not so often in concerts like The Last Song and Indian Sunset and also they play Crocodile Rock as a Ballad! Just one word fantastic. But Don't forget also the Rainbow Concert in London 1977. Also a very good concert". "Attending these shows was special back in 1993. "I belong to the Elton fan generation that missed the first run in the late Seventies, and I always felt that this was a big loss" continues Stephan. "So I was glad when they returned to the stage together in 1993. But know that’s done. It’s been one of the highlights for me as an Elton fan. I still remember how it sent gentle shivers down my spine when Elton performed “Tonight” and “Ticking” back to back. But whatever he will do now, he will not be able to bring back that feeling, and that’s why I think that attending one of these shows will end with disappointment. It was special back in 1993 and it will stay in my memory forever as a special event. Trying to repeat it will only spoil that memory".

Thank you. And what could we expect for the 2009 shows? New songs on the set list? Is the kind of show fans are expecting? Stephan for example: "Quite frankly, as much as I would like to attend one of the upcoming shows with Ray Cooper on the one hand, I fear that I would be kind of disappointed on the other hand. It’s like you said, the show was unique at the time, i.e. back in 1977/1979, and maybe it was also unique again in 1993 for the new generation of Elton fans, but for this “re-run” in 2009 my prediction is that we will basically see/hear the same set list as in 1993. For those attending the shows, I hope that Elton will proof me wrong. As for myself, I have decided to not attend any of these shows this time. I might change my mind in case there will also be one in Munich, but apart from that I think that tickets are far too expensive". Ian: "I think this time around the set list will be a bit safer, as Elton's shows seem to be in the UK recently. More greatest hits. But hopefully there will be a few suprises." That's a general opinion, maybe, you KissyBissy are in the line. "I'm not so sure about Elton playing obscure songs. Lately he's been too much on the hits. However, we can expect more uptempo songs that fit the format. So, certainly it will be a great concert".

"These are the songs Ray and Elton played together and order of most frequently played at concerts, see how obscure this list is!" says Wim, who's relating the tracks played over the years in that kind of shows:

Bennie And The Jets, Better Off Dead, Candle In The Wind, Daniel, Don't Let The Sun Go Down On Me, Funeral For A Friend, I Think I'm Going To Kill Myself, Idol, Take Me To The Pilot, Tonight, Your Song.

With one show: Border Song, Cage The Songbird, Dan Dare (Pilot Of The Future), Goodbye, Saturday Night's Alright (For Fighting) and Sweet Painted Lady (1977); Ego, Get Back - Back In The USSR, Goodbye Yellow Brick Road, He'll Have To Go, Part-Time Love and Song For Guy (1979); A Woman's Needs, I Don't Wanna Go On With You Like That, I Need You To Turn To, Mona Lisas And Mad Hatters, Sacrifice, The North and We All Fall In Love Sometimes - Curtains (1993) and finally Believe, Can You Feel The Love Tonight, Live Like Horses and Percussion Solo Ray Cooper (1994).

Wow, what a great job, Wim, thank you. "In 2009 can we expect new songs from this couple? Maybe Some songs from the last album like The Bridge, Blues Never Fade Away or Postcards From Richard Nixon? I really don’t know. As a fan it’s always nice to hear them play new songs. In October I go to Antwerp Belgium and Rotterdam Holland (Red Piano Concerts). I am looking forward to see this two concerts but…" We'll could see, Wim.

"I'm really happy to know that Elton and Ray will be together on stage once again. Elton's band is amazing, such as his solo shows and the "Face to Face" ones with Billy Joel, but I think it's great to make a change" expresses Patty Perrin, adding: "I hope to hear more obscure songs. As a "real" fan, that's always a special gift. But I think they will play a few of those songs such as new ones and mainly popular hits. I think that a show with Elton and Ray is a very good idea in these days. The fans who had already watch them playing together surely will love to see them again and it's a great opportunity to those who haven't. An eltonite MUST be there! It's the kind of experience that will turn unforgettable! An incredible piano player and an amazing percussionist alone on stage is not so common to enjoy, but finally, there's a chance!!!".

"I believe that it could be possible for Elton and Ray to do a new song in their coming tour." says Shea Forster-Helms, "However I am not counting on it. The 2009 shows should be very fun and definitelt not to be missed by any Eltonite. I believe that the fans are expecting a fun entertaining show. They will not be disappointed." We hope so. "I think for the 2009 shows we can expect some obscure songs as in 1979 in U.R.S.S. tour, but more than this it will be an experience to revisit EJ & Ray Cooper collaboration and I hope they will spend nice time together, it's a king of show fans are excepting so much, I think an Eltonite couldn't miss a Ray Cooper & Elton Show ! ;" ahhhh Laurent, you have reason lol!! "I will be at Grenoble, France, on September, 27th, and I think it will be a fantastic night !" great Laurent.

"Can an eltonite miss a show like this?" self-asked Ian: "Well I am missing this, due to the over inflated prices of Elton shows in recent years, but for anyone that has never seen an Elton & Ray show, then it's going to be a great concert for them, and well worth paying the extra money, but Elton or his promoters should really look at their pricing for Elton's concert and bring them down to a reasonable, affordable price." Another true reason. "I hope that everyone who attends the Albert Hall and any of the other shows that Elton and Ray are performing will have a fantastic time". Thank you Ian.

"I think an Eltonite can not miss a concert with Elton and Ray. Honestly if I could choose I would change the two tickets for one concert with Elton and Ray. But I am a lucky guy as I have a ticket in Holland in front of the piano on the first row!! " Wow, Wim, you're so lucky hehe. "I'm looking forward to these shows, despite of not being able of attending them. I would love to attend, cause it's a show I've never been to. Ray Cooper is a real show man. He can replace a whole band. A show that no Elton fan can miss!" Thanks too, KissyBissy.

Well, we will have here in AllSongsList a complete review of the show on "Jack Rabbit's In London" label. Jack Rabbit's number 4 time in London, really. With your permission "A dream to be true to be in the Royal Albert Hall with Elton, Ray, and the Royal Academy Of Music". Ahhhhhhhhhhhh!!!!!!!
by Jackrabbit on 3:35 am