The Story Behind... Nikita's Video

Anya Major (born 1966) is an athlete and model who is well known for starred in Apple Computer's famous "1984" commercial and for being "Nikita" on Elton John's video. 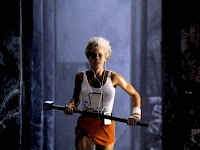 In 1983, the Chiat/Day advertising agency held a casting call in London, on behalf of their client, Apple Computer, for what would prove to be a landmark television commercial. The vision of the agency and director Ridley Scott stipulated an actress capable of running up to a large video screen, swinging a sledgehammer in a wide spin, and releasing it at the video screen. Unfortunately, most of the models and actresses tested could not wield the clumsy hammer, much less throw it; in fact, one errant throw nearly struck a passerby at the Hyde Park casting call. Major, an experienced discus thrower who had been discovered at a local health club, won the role with her ability to handle the hammer convincingly. Anya Major proved capable of spinning and accurately throwing the sledgehammer with ease. 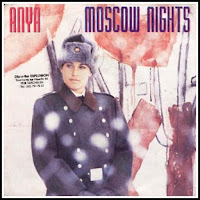 Anya also appears as a blond caucasian beauty in soviet uniform on The Ken Russell directed video Nikita. "Nikita" is set along the Berlin walls and it's the story of unrequited love where capitalist Elton in his Rolls-Royce can only observe her from behind the barbed wire and hope that one day the wall will come down and she will go west. In interviews John admitted that Nikita was a male name in Russian, hinting at the song's homosexual view point. However, Nikita is a male or female name meaning unconquered, unconquerable. As a spin-off, she released a single named "Moscow Nights" using the name Anya. With music and text by Bobbie Heatlie and Gordon Campbell, it was a hit in Holland, reaching number 9 in singles dutch charts.

Anya is the Russian form of Anna which means "graceful". Anya Major did not die of breast cancer as it was said and is alive, thank God, and well living in England with her husband and three children.
by Jackrabbit on 3:35 pm