Anna Sergeyevna Kournikova (born in Moscow, 7 June 1981) is a semi-retired Russian professional tennis player and model. Anna received her first tennis racquet as a Christmas gift in 1986 at age 5 and, in 1986, she became a member of the prestigious Spartak Tennis Club. Kournikova debuted in professional tennis at age 14 in the Fed Cup for Russia, the youngest player ever to participate and win. After her success in the juniors, Anna turned pro in 1995. She won two ITF singles tournaments, the 1st in Midland, Michigan, and the 2nd in Rockford, Illinois. Anna Kournikova, an eltonite, joined Elton John’s tennis team at the event called Advanta WTT Smash Hits. Last Smash Hits charity tennis exhibition to Kennesaw State University in Kennesaw, GA, raised over $400,000 for the Elton John AIDS Foundation and the Atlanta AIDS PArtnership Fund.

Roman Arkadievich Abramovich, was born on 24 October 1966 in Saratov, Russia. A Russian billionaire and main owner of private investment company Millhouse Capital, is also the owner of Chelsea F.C., an English Premiership football club. Roman was an orphan at 3, and had to live with relatives as a child. He started commercial activity in the late 1980s when Soviet president Mikhail Gorbachev's reforms permitted small private businesses. Abramovich founded five companies to conduct resale and act as intermediaries, eventually specializing in trading of oil and oil products. In 1999 Abramovich began charitable work in the Chukotka region in Siberian Russia, a cold, impoverished region of the country. Abramovich was particularly interested in helping children and established the Pole of Hope charity to help the people of Chukotka. Roman Abramovich and Irina, attended a charity concert given in 2001 by the British singer Elton John in the Catherine Palace outside St. Petersburg. 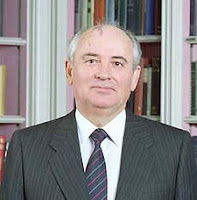 Mikhail Gorbachev, Born on March 2, 1931, at the village of Privolnoye, Krasnogvardeyskoye District, Stavropol Territory. Graduated from the Law Department of the Moscow State University and by correspondence from the Economic Department of the Stavropol Agricultural Institute. From 1970 to 1978, First Secretary, CPSU Stavropol Territory Committee. The March 11, 1985 extraordinary plenum of the CPSU Central Committee elected him General Secretary of the CPSU Central Committee. Member of the Presidium of the USSR Supreme Soviet. In that period of his political career, Mikhail Gorbachev proposed a number of radical social and political reforms, which became known as "perestroika". Since 1991, he has been president of the International Fund of Politological and Socio-Economic Studies (Gorbachev Fund). Elton John, in 2007, was at a stunning gala dinner in aid of the Raisa Gorbachev Foundation. Hampton Court Palace provided an imposing backdrop to the event, hosted by Mikhail Gorbachev to raise funds for the foundation, which was established in memory of his late wife Raisa to help find a cure for cancer in children.
by Jackrabbit on 3:21 pm