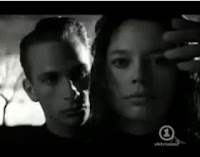 "Healing Hands", Bernie's update of the Four Tops' "Reach Out I'll Be There", is an anthemic soul number about the redemptive power of love. More than anything, it's a song of resolve and positivity, of never giving up into the darkness. Elton, in need to getting sober and, Bernie, surviving the failure of his second marriage, decided to pay tribute to the black music they grew up with. The video, directed by Russell Mulcahy, features backing vocalists Marlena Jeter, Mortonette Jenkins and Natalie Jackson, in a black and white film. Musetta Vander makes her appearance near the end of the video.

Born Musetta van der Merwe, May 26, 1969, a South African actress and model who is best known for her roles in science fiction and fantasy films. Musetta first notable role was as 'Zander Tyler' in the action-adventure TV series Super Force. Also she's appearing as the "dream girl" in more than 20 music videos for such top recording artists as Rod Stewart, Tina Turner or Chris Isaak. In 1999, she had a supporting role in Barry Sonnenfeld's film 'Wild Wild West' in which she played an assistant to Kenneth Branagh's character, "Dr. Loveless". In 2000, Musetta played a seductive Siren in the critically acclaimed 'O Brother, Where Art Thou?' directed by the Coen brothers.

"Something About The Way You Look Tonight" (1997) featured Sophie Dahl alongside a host of other models including Kate Moss or Cameron Alborzian, and it was filmed during the summer of 1997. It was due to be released as the first single from Elton’s “The Big Picture” album, and promotional copies of the single were issued prior to a planned release in September. The picture to the left features the photo used on the promotional sleeve. The death Princess Diana, changed the course of history. Nonetheless, it remains one of Elton’s more obscure videos - even more bizarrely, the 1998 Japanese reissue of "The Big Picture" features an edited version of the video on the enhanced section of the CD, which fades out before Sophie even makes it on screen! All of Elton’s various Video and DVD collections have neglected to include the song.

Sophie Dahl has successfully transitioned from former model to actress and author. Dahl was born in 1979, the daughter of Tessa Dahl, a writer, and actor Julian Holloway. She was discovered in 1995 on a London Street at 18 by Isabella Blow, a stylist at Vogue; rebels against usual model standards with 38DD bra size. Isabella was awestruck by Sophie's beauty. Soon after, she referred Sophie to Sarah Doukas of the Storm modeling agency in London. Her most famous campaign was with Yves Saint Laurent which was contraversial for her poses. In addition to modeling & acting, Sophie also writes short stories, several of which have been published in various magazines. With Jamie Cullum, they celebrated their wedding at a country house in 2010 following a secretive marriage ceremony. 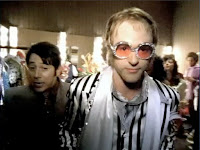 Paul Reubens appeared in the music video of Elton's single "This Train Doesn't Stop There Anymore", taken from "Songs From the West Coast" album (2001). In the video Paul plays the manager of a younger Elton, who in turn is played by Justin Timberlake. David LaChapelle and Elton created the concept of a nostalgic and moving journey, set in 'Elton world' during the Seventies, recreating a younger Elton in his wild and extravagance life on the road. Near the end of the music video, he is seen opening a door which reveals an implied orgy, white snow flying through the air, and a person in a rabbit suit (all a metaphor for cocaine use). Elton closes the door, and proceeds on to perform a song. The video was shot over two days at the famous Ambassador Hotel in Beverly Hills, Los Angeles, where Presidential candidate Robert Kennedy was murdered in 1968. Timberlake studied videos and archive footage about Elton for weeks to perfect the mannerisms.

Born Paul Rubenfeld on August 27, 1952 in Peekskill, New York, his acting career grew slowly and steadily with small roles in theater productions, gigs at local comedy clubs and four guest appearances on "The Gong Show" (1976). Paul is widely known as starring as Pee-wee Herman, an innocent man-boy who enjoyed playing tricks on his friends, in the CBS live-action children's program, Pee-wee's Playhouse, which lasted several seasons from 1986-1990. He also has appeared in such films as 1996's Matilda, 1999's Mystery Men and 2001's Blow.
by Jackrabbit on 4:30 pm