I've always liked music videos. I still remember me recording the videos on my old VHS record player when they were aired on the TV. Maybe I could say that I became an eltonite for the videos. It was so amazing to see Elton dancing on "Who Wears These Shoes?", falling on the sea on "Passengers" (not mention the helicopter), playing the piano on "I Don't Wanna Go On With You Like That"; the list could be so extensive. But I could not forget the video guests credited on Elton's videos: Robert Downey Jr. on "I Want Love", Bernie Taupin on "Passengers", Justin Timberlake on "This Train Don't Stop There Anymore"; another extensive list. Those were celebrities, of course, but what about the others guests? Who are they and what they've been doing now? 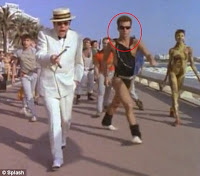 Bruno Tonioli, was 28 when he starred as one of Sir Elton's dancers for the top ten hit video "I'm Still Standing" (1983), which was filmed in Nice and Cannes, France. He wore a number of outrageous outfits including the ripped leotard, complete with studded belt and leather military-style cap, which he wears to greet Elton outside the Carlton Hotel in Cannes. In another scene, he sports some very tight and revealing orange trousers for a dance on the beach, while in another, he gyrates semi naked on a sun lounger. Bruno starred in the video when he was working as a freelance dancer in the Eighties.

He is a renowned choreographer and has worked on countless films, plays, music videos, commercials, concerts, trade shows and television series with such music icons as Elton John ("Please"), Michael Jackson ("Give in to Me"), Sting ("This Cowboy Song"), Tina Turner ("Steamy Windows") and Paul McCartney ("Hope of Deliverance"). He also works in theater and television: Tonioli has been a popular judge on all seasons of the ballroom US dancing competition, Dancing with the Stars and its UK counterpart Strictly Come Dancing. 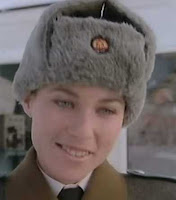 On "Ice On Fire" (1985), Elton released a love song who reached the top of the music charts across the world: "Nikita", featuring George Michael as a backing vocalist. It's undeniable that video helped in the success. Directed by Ken Russell, Anya Major features an East German female Border guard, on one side of the Wall during the Cold War conflict, with her "ten tin soldiers in a row", while Elton, a rich westener, is taking photos on her at the border crossing, as he is refused to entry. Only in dreams they could get together sharing their love. As a spin-off, Major released a single, "Moscow Nights", using the name Anya. "Nikita", a russian male name indeed, was not the first guest appearance by Major. In fact, Ridley Scott provided Major, then a discus-throwing athlete, the role in Apple's famous 1984 Macintosh commercial, for being the only one capable of running up to a large video screen, swinging a sledgehammer in a wide spin, and releasing it at the video screen of Big Brother.

Major was born in UK at 1966. There was a widely-circulated rumor years ago that she had died of breast cancer, but happily this was false. She's living in England with her husband Kim Rajah and their three children: Luke, Georgia and Oliver. Anya Rajah, graduated from Central St Martins, has exhibited her artworks in Tunbridge Wells (where she lives now), Brighton and London.

Singer and actress Mandy Moore appeared in the promo for Elton's Original Sin landing roles in the video as the daughter of Elizabeth Taylor and Elton, following her journey as an awkward teen circa 1976 (complete with braces, acne, bushy eyebrows, and wig) to her dream like fantasy of transforming into a rock groupie front row center of the VIP section of an Elton concert. The video, directed by David Lachapelle, let Moore to be close to her idol, as she explained about the experience: "Being the geek I am, I had him sign a copy of his ‘Yellow Brick Road’ album and [I] am getting it framed immediately", while adding "I remember sitting alone in the living room portion of the house we shot in and listening to Elton play ‘Crocodile Rock’. It was like no one else was listening.. like a private concert… too cool!!!". 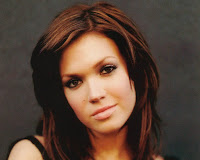 Born April 10, 1984 in Nashua, New Hampshire, she grew up in Orlando, Florida when she made a name for herself, from appearances in local theatre productions to singing the National Anthem at professional sporting events. Her first single, "Candy", from the CD So Real (1999), was released when Moore was only 15 years old (it was certified platinum in Australia). Her early films included the teen romance A Walk To Remember (2002). She has appeared in Romance & Cigarettes (2005) and American Dreamz (2006), including a role as Diane Keaton's daughter in Because I Said So (2007). Her fourth album, Coverage (2003), received a less than enthusiastic response for its musical maturity. Additionally, Moore has modeled, appearing on the cover of Cosmopolitan, started her own fashion line, Mblem, as well as the women's social network Upumpitup.com.


End Of Part One
To Be Continued
by Jackrabbit on 2:13 pm