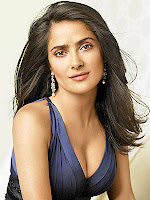 Salma Hayek was born on September 2, 1966 in Coatzacoalcos, Veracruz, Mexico. She's the daughter of Diana Jiménez, an opera singer and Sami Hayek, an oil company executive. Hayek's father is of Lebanese descent while her mother is of Spanish descent, and the first given name is an Arabic name that means "peace" or "calm".

At the age of 23, Hayek landed the title role in Teresa (1989), a successful Mexican telenovela that made her a star in Mexico. Salma Hayek was Lola in "Living It Up" (2000), a Mexican waitress who befriends Martin, a young, free-spending millionaire. The film included one of Elton's original songs: “Don't go breaking my heart”, covered by Carita.

Hayek is the first Mexican national to be nominated for a Academy Award for Best Actress. Salma become active with amFAR (Foundation for AIDS Research) in 2005. Later in 2008 Salma became a co-chairs and took part in an auction suppoting amFAR. Along with Penélope Cruz, at the Cannes Film Festival, they both "stopped me and asked if they could be bridesmaids (for Elton and David's Wedding)", Furnish explained; but they weren't. 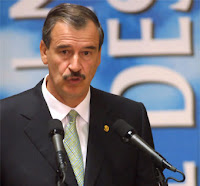 Vicente Fox was born in Mexico City, July 2, 1942. Vicente studied Business Administration at the Mexico City campus of the Ibero-American University. He went on to study for a Diploma in Upper Management, taught by professors from Harvard University Business School. In 1964, he joined Coca-Cola de México as a route supervisor and, while riding aboard a delivery truck, he had the opportunity of traveling almost 2,500 routes, some of which led to most isolated places in Mexico.

With his accumulated experience, he decided to return to Guanajuato to participate actively in business, politics, society, and education, to improve life in his state. In 1991 he ran in the election for governor of the state of Guanajuato. In 1995, he stood again, this time in the extraordinary elections for governor, and won by a significant majority.