Please, Eltonites, get up, stand up to receive one of the greatest musicians of the world... the fabulous... Jody Linscott!!!!!!!!!!! 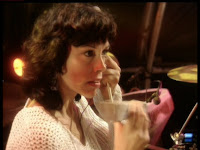 Hello eltonites, welcome to our homage to one of the greatest percussionist I've ever seen. Really it was difficult to replace Ray Cooper, but someone did an incredible job on the band. Before John Mahon, another percussionist took the cymbals, the congas, the drums, everything, to deliver unforgettable performances. It was such a short period of time with Elton, but she left nice memories and a deep love for her. The doors of allsongslist are all wide open to receive the one, the only, the unbelievable... Jody Linscott!!!! Nice to have you here, Jody, thank you very much for the accpetation, it's such incredible to have you here. Let's gonna start, if you give me your permission.

Which are your most beautiful memories of your childhood? How it was growing up in Massachussets?

My family loves Art of all kinds so my growing up was full and unusual. My favorite memories of childhood are ones of sneaking around the house when i should have been in bed, checking out the jazz musicians invited by the folks to the house when they gigged in town. The 78 rpm records were blasting and they had so much fun! otherwize, don't remember much about Boston really i left for England at 17 i believe and stayed until now.

What attracted you to percussion? What was the first percussion instrument you learned to play? And who were your influences?

It was my fathers amazing finger tapping... particularly at the dinner table. He was very knowledgable of rhythm and music. He unconciously did it i found out later but it grabbed my attention and of course being his daughter i tried to emulate it by first tapping out 'Wipeout' as fast as i could and then took to the pots and pans ...influences came from all directions probably because i had no direction of my own. At home we listened to and loved West side story and olther musicals, my fathers jazz record collection (Dixieland) and folkmusic collection (travelin songs... Woody Guthrie, Dave Van Ronk etc) english pop music, my mums favorites Judy Garland live at Carnegie Hall, Barbara Striesand, the sounds of nature on record... whale calls, wolves howling, birdcall, scottish bagpipes, Mahalia Jackson, the blues and classical of course, to name a few. Also my biggest influence was a master drummer called Mustapha Tety Addy from Ghana. He actually taught me 3 times and that style and content did it for me. Too bad i couldn't have had more time with him!

And you moved to London, where you signed your first professional contract with a band named Kokomo (name coming from an Aretha Franklin song, "First Snow in Kokomo", a small town in Indiana, USA). Kokomo, formed in May 1973, had a solid live reputation and were signed to CBS. I heard you was working as a waitress at Dingwalls in Camden Town at that time... How you get involved with them? I think it was in 1975, right?

Yes It was. I sat in with them as I used to do with alot of the bands that played there- if they let me-on my breaks. I kept my homemade congas in the cloakroom. Kokomo just were so great i played with them all night and got fired by dingwalls and hired shortly after by Kokomo.

Also you were in Paul Mc Cartney’s movie project, "Give My Regards To Broad Street", film completed by May 1983. Paul recorded all the tracks seen on the soundtrack album, some of which are re-workings of Beatle songs and his own solo works. How did you come to work with him?

He asked me and I said YES!

Great! After that you had the challenge of working with more variety of main stream artists through the 80's and 90's, from Joan Armatrading, Billy Bragg, Phil Collins, Ray Davies, Eric Clapton, Patti LaBelle, John Mayall, Nils Lofgren, David Gilmour, The Clash, Robert Palmer, Pet Shop Boys, Tom Jones, Hamish Stuart, Bryan Adams, The Who, Dido, Avril Lavigne, Mike Oldfield, Carlos Santana... Wow!! an ending list of superstars, really... I saw you in Mike Oldfield’s Tubular Bells Concert in Barcelona and for me it was one of most beatiful spectacles I’ve ever seen...

Jody, how you originally hook up with Elton and how you ended up recording and touring with him? Also, how do you value that experience from a personal point of view?

Luckily Ray Cooper couldn't do this particular tour and i was called in. It was truly valuable in every way. First off, I was thoroughly amazed at Eltons piano playing. I mean I knew he could play but he blew me away night after night. And we worked with a huge orchestra in the australian leg of the tour. It was fastinating, the difference in approach we scruffy rock n rollers had to them! We were amazed at how they read every note every night and still played with such passion and they were amazed that we didn't read and could still execute the songs at all!

Have you been an Elton fan before? Remember the first time you heard Elton’s music and what moves you to buy his music, in that case?

Elton was all over the radio of course and i liked his songs but to be truthful i was listening to other stuff at the time....so I got to discover him properly on the gig! which was unexpected pleasure I might add.

Leather Jackets sessions were in the middle of Elton's worst drugs days. Lot of material from those sessions weren't as good as Gus Dudgeon should expected, and Elton's mood was up and down. Also Elton wrote songs not only with Bernie’s lyrics, Gary Osborne was there too... What do you remember about that period? And how it was to work with Elton recording in the studio?

I was heavily pregnant during most of the tour and during the making of that record in Europe and my memories are of him in a good mood. I don't remember it being anything but a pleasant time though i had to leave early to have a baby. Things might have been tempestuous on tour from time to time....but in the studio he seemed comfortable. He and Gus seemed to have a good time together. Gus was great.

Elton began to have serious problems with his voice, at the America's leg of the Tour. How the band received Elton’s announcement of his throat problems and he had to been operate? It should be hard when he collapsed in the middle of the Melbourne Symphony Orchestra introduction on december 9, 1986...

How can one feel anything but sympathy when someone is going through something like that. It was very worrying for him and for us all and difficult to witness. He's tough though.

Elton married Renate Blauel in Australia, in 1984, but divorced in 1987. Have you ever been in touch with her? How Renate was? Elton had referred to her sense of humour, intellegency...

I met Renata when in the studio with Pete Townshend.... she was the tape op! We all liked her.... she seemed smart and funny, yes. We were suprized to find Elton and her married!

They tell me its hard but i wasn't paying attention. Too busy trying to prove myself ha ha

Great!!! What type of drumming is your own favorite style? What moves you in the direction to find new drumming sounds? 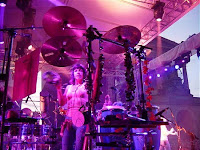 Well i always liked good funky bands... i loved being in Kokomo...but its a difficult question because i really go through fazes of going crazy for this for a while and then that.... what inspires me to find new drumming sounds is what the music suggests. sometimes you listen to a piece of music and you want to add a sound that you just can't buy so you got to find it somehow.. it could be something that isn't a standard percussion instrument at all.... like the sound sawing a piece of wood makes..you think it would be perfect for this song, so you saw a piece of wood! and it may be whacky but it sure is fun to invent something......

You are also a childrens book author and had two books out by Doubleday, both edited by Jackie Onassis, about a band of wandering musicians called The Worthy Wonders, who, en route to a gig, are shipwrecked on a mysterious island. You have written several songs for the books...

Yes, all true. It turns out i have a little talent for writing kids songs.

What would you like the future to have in store for you? What other recent projects have you become involved with?

lots of gigs. I like playing out. Swing out Sister! And is it ever fun. Smallishband.. no drummer can you believe! we have invented a brilliant sound and when we play, everyone..us and the audience have a great time. Have had to concoct a few new things for that gig I can tell you!

Oh, finally, could you tell me your five favourite Elton's songs in running order, for my AllSongsList, where I tried to find the best of Elton’s songs ever?

Thank you very much Jody, so honoured to have you here on the blogsite. Oh, before you go, I've got here some people they want to tell you something. They kindly agree to collaborate and sent me their thoughts about you, with the pretention to make you smile. Hope you like it.

Fred Mandel, musician: “Jody was my buddy on the road. She is a great percussionist.....one of the best in my opinion. I was just watching a Tom Jones concert on tv recently and Jody was up there tearing it up! She was a lot of fun to hang out with on the road and there are some funny stories that came from that time period. I respect her a lot as a musician....she's a badass player and an asset to any situation she's involved with. I haven't seen her in a long while but we're still pals and I wish her the best in all her endeavors”.
by Jackrabbit on 4:16 pm