Ladies & Gentlemen: the EltonJohnAllSongsList doors are wide open today to receive one of the greatest talented musicians of the world...

Yes, I am so proud to have an incredible musician here, in the site. He plays percussion, drumms, sings... he's so complete. Please, eltonites, get up, stand up to receive the fantastic, the incredible, the phenomenon... from Ohio... the greatest John Mahon!!!!

Welcome to Elton John AllSongsList blogsite, John. Thank you very much for the acceptation and for being here. I knew you were very busy but you didn't care about sharing some of your short off time to be with eltonites. I want to thank you for that, because all we are specially happy to be in touch with you... Let's start, then, with the questionaire asking...

At what age did you decide you wanted to become a musician? And why the percussion? You also play the piano and guitar, do you?

I started playing drums at age 12 or 13. My father took me to join the Police Boys Club Drum and Bugle corp and I had to pick between trumpet or drums.....well....no brainer there! Then I joined the school band, concert and marching - played the bass drum - it was the coolest cause you are the tempo keeper. The driver so to speak.

Great!!! What were your musical influences? You have been in Marching Band, Orchestra, Jazz band and the Choir...

Some of my main influences were bands like The Doors, Zeppelin, CSNY and Elton too - then I started digging horn bands like Chicago & BST. My brother played sax in a soul band and that turned me onto lots of R&B. I was playing alot of funk and R&B with bands, then I got turned onto jazz and things changed. I became more serious by studying and taking music lessons of all kinds. I play just a little piano and guitar - some chords - I could not do a dinner set!!

hahaha Vocals, drums, percussion, songwriter, producer, groove and beat maker... an endless list for a versatile man like you... You featured with Al Stewart and Peter White, composed soundtrack albums for Wild Whirled Music and even a commercial for Ray Charles. What about those experiences, John?

All those early musical experiences and influences made it the perfect transition to what I do - which really is rhythm based. When song writing and producing someone needs to lead the way in the beat department - I like that role!

I know when something has a pocket or just feels right. And I learned so much about lyrics by listening to the best - Bernie for example.

Yes, the greatest Bernie!!! How you got involved with Elton and how you ended up recording and touring with him? And have you been an Elton fan before?

I got involved with Elton by recording vocal tracks for Davey and Guy. I was playing with Three Dog Night's Chuck Negron at the time but was always doing other projects on the side. That led to an audition, rehearsals in Nice, and my first show in Germany. 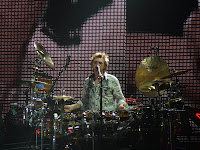 I have always been an Elton fan - mostly the Madman record. My friend had the songbook and we would sit at the piano in this little bar in Harrisburg Ohio - Woodies - and sing those songs.

Thank you AnnaBCN for your picture... Elton is known for his interest in the music chart successes of his albums and singles. Is that so? Does he follows the charts every week? Do you know if Elton's has a diary of his concerts or set lists?

I think Elton mostly follows the record charts to see what is new. Elton has an incredible memory. He remembers every show he has played and definitely keeps a daily diary of his life. The set lists are saved and stored away so in effect he does have them too.

Wow!!! What could you explain about Elton’s future concerts, through 2009? There will be a new album, then? I read some collaboration with Billy Joel and a new album with Mark Ronson...

Honestly I do not know anything other than the Billy Joel tour, more Red Piano and possibly some new recording but I don't know with whom. 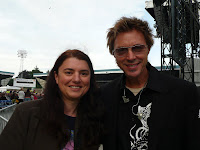 Brigitte, "your best french fan", would like to ask you the following question: “Would like to do a duet with Elton, only piano, vocals and percussions, not in the Ray Cooper way, it could be more like a duet, with your backing vocals, like you did for Roy Rogers at the 60 birthday... Do you enjoy this kind of stuff? And when you will do your own album? You have already a buyer!”

In my off time I write music, mess with photography, cycle, do a little home improvement, go to the movies, walk my dog and even play video games.

My favorite EJ songs.... tough one...
Levon, Harmony, Captain Fantastic, Madman Across the Wa'er, Believe, All That I'm Allowed. Oops that was 6.

hahahaha thank you anyway, John... Oh, I like your website, that’s on www.johnmahon.com... What could eltonites find there?

I'm sorry but I have not done an update on my website for a while. I have a hard time doing it on the road because we move so often - cannot really leave the computer hooked up and every hotel is a new experience at getting online! But please keep checking - i'll get some new pics up there soon!!

Hahahaha yes, it sounds!!!! Thank you very much, John. I feel so priviledge to have a current musician of Elton's band, specially you. I could not imagine Elton's band without John Mahon so, please... keep it on. I wish you all the best!!!

Oh... I would like to surprise you, John. You've been so kind with me, though I thought about inviting some people, you know very well, whom kindly wrote me some words for you... So, with my best intentions, here you have it:

Chuck Negron (formely from Three Dog Night Band): "John Mahon was a pleasure to work with and travel with. He always had an up beat personality and smile for you! I remember a show in Guam where the stage had a mountain like back drop which John climed to the top of it, not missing a beat of his percussion! The audience loved it, as I did! I enjoy a good entertainer, and John was one!"

Curt Bisquera (Drummer): "John is a sweetheart of a guy... plays excellent drums and percussion and sings his butt off!!! He's got that mid-west groove thing happening... he's a singers' dream... just ask Elton!"
by Jackrabbit on 12:41 pm