The Eltonite's Day With... Steven Betts!!! 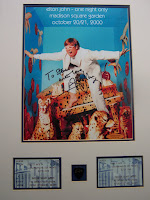 Hi Eltonites!!! Today is a very special date because we have here a very special people, a very special friend. Me, a fan since 1984, I always have dreamt how it could be being a fan in the mid-70s, with Elton on the top, with the outrageous customes, and things like that. This is the ending week of "The Union", Elton has reached high in the US music charts again, so I sent old Jack Rabbit to Scotland to find out someone who is a fan since that mid-70s, someone who knows everything about Elton, he has a great collection of tickets (don't touch them, Rabbit), and he kindly agrees to be the guest. Ladies and gentlemen, the doors of AllSongsList are all wide-open to receive the fantastic... the one and only... Steven Betts!!!!!!!!

Hi Steven, so nice for me to have you here, really an honour. Thanks for the acceptation. First... Could you tell us, please more, who are you and where are you from?

Thanks! When did you became an Eltonite? Remember the first time you heard Elton's music and what moves you to buy his music? 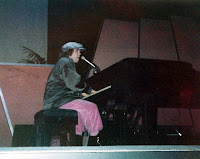 1972/73, Back then here in the UK we had “pop” bands/artists like Slade, T Rex, Bowie that I was well aware of, think it was the summer of ’72 that I became more aware of Elton, I had heard of "Your Song" and "Rocket Man" but then in ’73 with the release "Crocodile Rock" I probably started to sit up and take more of an interest, although the first album I bought was GBYBR and not Don’t Shoot Me, as a 12/13 year old then I was more into singles than albums. It was that purchase of GBYBR that really got me hooked.

So understandable!!! And what was it like seeing Elton for the first time and how many concerts have you been? 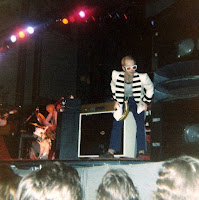 First time was unbelievable, I remember sleeping out from about 10pm the night before tickets went on sale, it was a freezing cold February night (13th) for a concert that wasn’t on until 21st May.

Will never forget the night of the concert looking back seeing the whole place swaying back and forth to "Bennie And The Jets", sadly never see that now. Everyone was into the music back then.

I have been fortunate to have attended 44 concerts to date, upcoming I have Dublin in December, London in January and Glasgow in June.

Wow!!! Throughout the mid-'70s, John's concerts were enormously popular, until 1976 when he revealed in an interview in Rolling Stone that he was bisexual. Many fans reacted negatively to John's bisexuality, and his audience began to shrink somewhat in the late '70s. You were on the Festival Popular Music show. How he was received? What you most remember from that show? 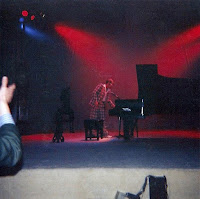 To an amazing response, to be fair I don’t think it hurt him as much here in the UK as it did in the States.

What I remember most is Elton slowly getting drunk, giving away the piano stool and drinks to the audience, singing DGBMH himself, standing on top of the piano with a tartan scarf around his head like a bandana, and a great setlist, this was the original solo gig and was filmed for TV, this is one show that really needs to be put out officially on DVD

Really? Upps!!! Which could be a great set list, in your opinion? Is there any song that Elton hasn’t played yet, and you think that he should do it?

Davey? Take a note!!! And you prefer the Elton’s solo tours or better with band? With the same musicians as his current band or you miss someone of the past? And what size of venues do you most prefer to see a good Elton’s show? 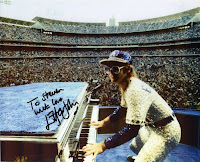 Having been lucky enough to have seen most combinations of tour/bands (except with Eric Clapton and Leon Russell) I don’t really have a preference, if pushed then band, as for venues I am not keen on the outdoor gigs we have had here the last few years in the UK, reasons being unpredictable weather, atmosphere (lightshow) think with these outdoor shows in the UK we have people coming along for a event, not your normal Elton concert goer from years ago, people now come to see the guy who played at Lady Diana’s funeral, he’s become an icon and rightly so, but these people come for other reasons, don’t think they come to hear a 13 minute version of "Rocket Man".

For me I would love to see Elton go back to playing the small UK venues like he did on the 1976 UK tour, 3 to 4 thousand venues and this was at the height of his popularity.

Funny thing is, look at the crowd at Dodger Stadium, everyone having a ball, that blows my outdoor gigs reasoning out the water. Mind you that was California and not Carlisle.

Right. Scottish Davey Johnstone recognizes that “I always get a great reception when I come back to Scotland”, his homeland, and even he celebrated his 2000th concert with Elton at Glasgow's SECC in 2009, after a relationship that has spanned almost 40 years. Were you at this show? And what does Davey means for you, scottish people?

Yeah, was at that show, just makes you really proud as like me he’s from Edinburgh. And of course we also used to have David Paton in the band also from Edinburgh.

I have been fortunate to have met Elton backstage in Kilmarnock on the 26th June 2005.

Now I would ask him when’s he going to get back playing small venues and a little less greatest hits. Thing is with Eltons back catalogue he could change the whole set list and casual fans would still know the songs, "Little Jeannie", "Club At The End Of The Street", "Island Girl" etc etc, so many singles that were hits never get played live, change it around a bit to keep it fresh.

Agree!! What do you think about the new project with Leon Russell? The reviews of the album were so good but the sales disappointing, again. We could be in front of one of Elton’s hits of the century but that isn’t reflect on the music charts. Are people tired of Elton?

Interesting, as the last 3 albums I had heard most of the songs on them before they came out and was determined to not listen to anything from The Union until the day of release, and to be truthful wasn’t looking forward to it with Leon Russell, now having heard it I think it’s a good album, although it’s not in my top 10 (yet), maybe it’s me but I just don’t get some of the hype I keep reading or hearing about it, it is a grower and a few tracks I really love, and maybe a few months down the line I will have a totally different view. From the last 4 releases I prefer Songs From The West Coast.

I think Joe Public is tired of Elton album wise but they will still go to concerts to see a legend, the die hards aint and will always purchase the albums.

So what kind of place do you see for Elton John in the History of Rock Music?

I think he will be up there at the top table with the greats.

You’re a great collector, so: which is your Elton's item that you really appreciate, for being hard to get or for the happiness you've got to have it? 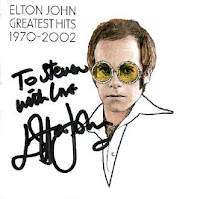 I do like the items that I have had sent back to me signed, bottom line it’s all about the music.

To be honest I really don’t know, don’t even know how many I have now, but it is over 800. A few of early one’s that have surfaced recently are excellent (setlist and sound wise)

Oh, we’ve got Elton in cadbury’s chocolate figure, Elton in rag, and the beatiful dolls on Elton. What could it be next?

What about Elton pasta, if it’s good enough for Mickey Mouse. LOL

Finally, could you tell me your five favourite Elton's songs in running order, for my AllSongsList, where I tried to find the bests of Elton’s songs ever?

Special mention for Shine On Through and Sugar On The Floor

Although us long time fans moan about too many greatest hits at the concerts, I think we should just appreciate that he does still go out on the road.

Elton has shown in other “special” concerts that he can and will play some forgotten gems, look at the Captain Fantastic shows, the 60th Birthday show, nearly playing the whole of Peachtree Road in '04, and the latest Union tour.

Oh, once you said: “I am disgusted with some of the comments on here regarding Elt cancelling gigs, Yeah, it's the worst I have known re cancelling gigs, but do you really think Elton wants to cancel them, of course he doesn't”. People don’t have patiente enough?

Just couldn’t believe some of the comments / attitude of some people last year when he was cancelling gigs, we all get sick / have off days, he has cancelled 2 shows I was going to over the years (Leeds Castle and Glasgow) have had hotels booked flights booked, nothing you can do, the man was ill end off.

Well, thank so much Steve for being here. I am so proud of your interview and for me it was a pleasure to dedicate the day to someone like you. But please, before you go, wait a minute because I hear somebody's knocking the door. Come on, guy!!!

Hi Paul Purcell, welcome to the Steven's Day. You know Steven, right? How could you define him, as an eltonite?

"Steve is the most generous and genuine Eltonite I know. A real man for the music. I could talk to him for hours and hours and often do!" Right. Do you enjoy his interview, right? Anything to add? "He is always telling me about the olden days of being an Eltonite and how he has followed Elton through thick and thin. Once or twice over the years he has told me about him being at the solo show in Edinburgh in 1976. I think he may have mentioned also that it was the first solo show...EVER!!".

That was a great experience for you, Steven. We remember our first concert as something very special, and being in 1976 seeing Elton not everyone could tell. Thanks Paul for joinin us on Steven's Day. Anything more? "I'm delighted that he has been added to the roll of honour and has joined a very exclusive club". Yes, he deserved it and for me it was such a pleasure to learn more from him. Bye People!!!

pictures courtesy by Steven Betts
by Jackrabbit on 5:25 am