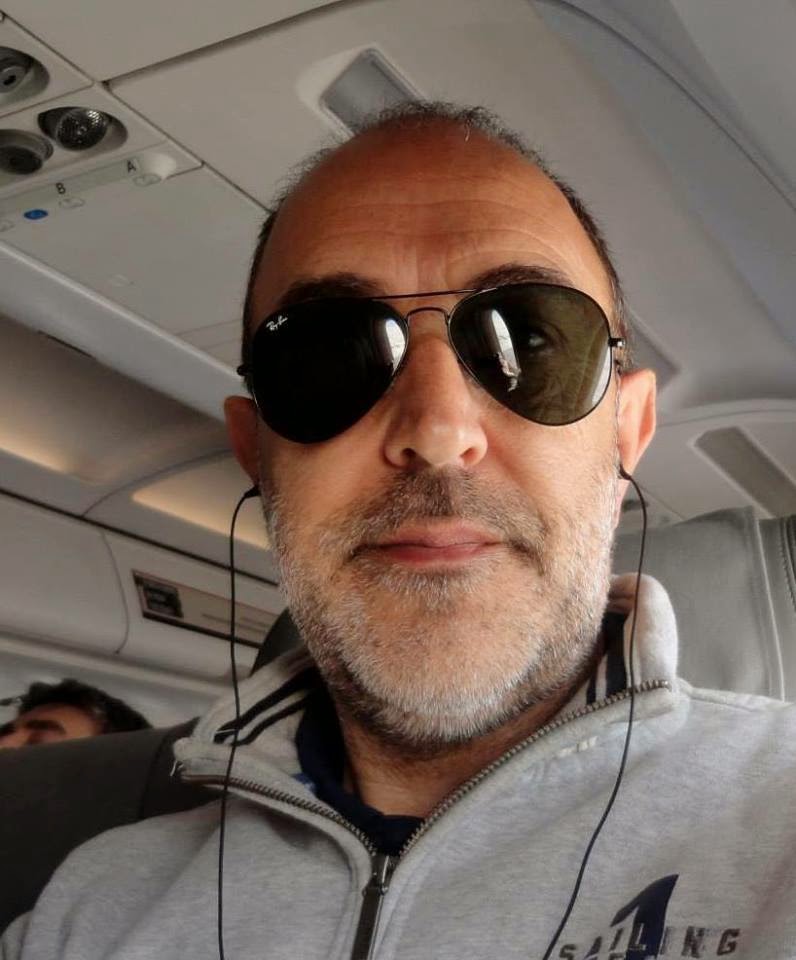 
"Singles, album, vinyls, CD’s, promos, bootlegs, tour programs, books, covers, music sheets, … I have the same single from 10, 20, 30 different countries …" explained me in 2008 when I interviewed him related to the Eltonite's Day. That man is amazing. You could check out his website, that's one of bests fansites in my opinion, http://www.eltonjohnitaly.com/. Even in 1993, he produced a fanzine "Madman" for and dedicated to the heartfelt collectors, until 1996. He's a reference in Italy about Elton. When I was in Milan in 2004 due to the presenting of the "Peachtree Road" album, every one I met was talking about Beppe, so I had to meet Beppe, and the meeting was not disappointing, on the contrary. Beppe, if you made your reviews in english instead of (and also, of course) in italian, you could get the recognition you deserve.This is your turn.

Well, Elton is my life for about 40 years! And not only my musical life ...  Year after year his music has marked my life, everyday. Through Elton I've met a lot of people, I've travelled to a lot of countries, I went crazy for collecting records! Since the summer of long long time ago, when I heard Rocket Man for the first time. After that summer, nothing would ever be the same again.

30) Holiday Inn   From Madman, a fresh sound, an unusual Elton in a track marked by Caleb at the guitar and Davey (!) at the mandolin. Elton at the top of his inspiration could make even immortal a song about a hotels chain.

29) Emperor's New Clothes  The comeback with a great album, SFTWC, after years of mediocrity, and Emperor is an excellent track that reminds me the early golden era (1969/71), before the pop transition.  A basic production by Pat Leonard, with a great piano playing in front of you, a pleasant shock at my first listening.

28) The Ballad Of Danny Bailey    A classic from GYBR, the Elton storyteller that I like. A great percussive piano that I like very much.

27) Better Off Dead   Such a “cabaret” song from Captain Fantastic, powerful, it always reminds me of the solo piano shows Elton did with Ray Cooper, a great song.

26) It Ain't Gonna Be Easy   An unusual track from A Single Man, a great guitar player as Tim Renwick can duet with the piano at the same level. An underrated song from an underrated album. Gary Osborne is not Bernie Taupin, but this is a great song.

24) Where To Now St. Peter   From the “old West” album, a little masterpiece. He unfortunately cannot write such a piece, this is an unrepeatable Elton’s production from every point of view. We have always the duo Buckmaster/Dudgeon at their top levels. 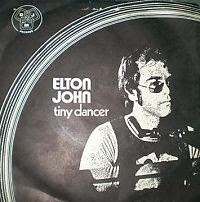 23) Tiny Dancer   A classic in the discography of Elton. Too much live versions bored a little the audience, but the original with great musicians becomes everlasting. A song not to be discussed, we can only appreciate it.

23) Harmony    A wonderful song filled with vocal mixtures already in the legend created by Dudgeon for 70’s albums. Unknown to the non-fans, it’s actually a classic of his production unfortunately it seems that Elton had forgot it.

22) This Song Has No Title   A fresh underrated song from GYBR, really nice. One more example about underrated songs by fans themselves, but perfect in their simplicity and inspiration, it’s the pop period, but at highest level.

21) Mona Lisas And Mad Hatters. An amazing tune about NY City from Honky Chateau in the middle of the passage towards pop of "Don’t Shoot Me" album. Perfect and unique in that genre, a little anomalous in his standard production, with mandolins.

20) Believe    Top 20!  It’s in my opinion one of the best track of Elton, after the golden years (60's/70's). It expresses a dramatic power and a quality that has no comparison in his production in those years, it’s the gem of 90’s.  Paul Buckmaster dislikes this production, but I like it very much!

19) All The Girls Love Alice   Elton rocks! My favourite rock song, fascinating, essential, with, for once, a good guitar riff by Johnstone, it’s certainly one of the best rock pieces in the whole Elton’s production, it’s fantastic live too. 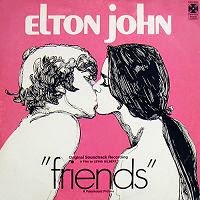 18) Seasons A tune from Friends couldn’t be missing, considered a minor album, but containing some little gems, and Seasons is one of them, always under Buckmaster’s sign.

17) First Episode at Hienton   Perfectly inserted in “Elton John” album, melancholy atmosphere. It is one more example of how magisterially was Bernie’s cryptic lyrics set to music, simply delicious.

16) Rocket Man  Long time ago, in the summer of 1973, I discovered the music and Elton John with this song, I can remember when Rocket Man came out from an old radio in my summer house. It was a lightning struck! And It will be always in my heart ...

15) The Greatest Discovery A simple, touching track from The Elton John album, a so simple theme of a little brother birth, performed in a perfect way with top inspiration.

14) We All Fall In Love Sometimes/Curtains   The end of the concept album Captain Fantastic, a memorable ending medley, the band at his best, with incredible backing vocals and a memorable drumming by Nigel.  Simply perfect (p.s. This ending is very similar at the ending of the Desperado album by The Eagles, 1973)

13) Take Me To Pilot  It is already a classic, also in live repertory, even if it denaturalizes in comparison to the original one, that remains an example of what the real Elton could do. Incomprehensible lyrics, but a wonderful song from an era that was musically wonderful, not only for Elton. 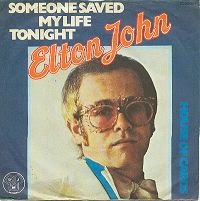 12) Someone Saved My Life Tonight . Once again from Capitan Fantastic, a piece that moves me everytime, with the band at their best, fabulous vocal mixtures and a great inspiration. From this album Elton John Band actually emerges as ensemble.

11) Your Song     It's the trademarck of 40 years of stardom, this song is THE SONG, it's Elton John, there's no Elton without Your Song.   It's not the song of my life but it's a great universal song in the history of pop/rock music.

10) Goodbye     The Top Ten! The last track of Madman Across The Water, metaphorically it's a goodbye to the early Elton John, from now it will be the starting as a pop icon too. The track is beautiful is his simplicity, it's a touching on my heart every time. A Masterpiece!

9) Have Mercy On The Criminal    A dramatic track from the "Don't Shoot Me" album, very powerful, I like it very much. In there I find the atmospheres of previous albums with Buckmaster’s arrangements, but this time in a pop key more manifested. Elton and Bernie still at top.

8) Funeral For A Friend/Love Lies Bleeding. An instrumental performance nearly perfect, not showing its age at all, it could be written yesterday, it always sounds fresh and modern. Love Lies Bleeding doesn’t compare but assimilate very well and already is one that remains in my heart.

7) Sixty Years On    This song has a very heavy production in the album Elton John, but it's a masterpiece from Elton and Bernie, incredible mix of music and lyrics. And Sixty always remember me the powerful sound of the trio (Elton, Nigel and Dee) in the fantastic 17-11-70 live album, a terrific version.

6) Madman Across The Water. The title track still sounds so powerful, dramatic and cryptic. As if it would be written today. I have no words, in my mind, it’s simply a masterpiece.

5) Levon. Once again from Madman, one more classic at high level, probably the more cryptic lyrics could excite to the best Elton when he was writing; the album production then gave a touch of perfection and immortality.

4) Ticking   Another very basic song, Elton, his piano and David Henschel on synth.   A drammatic story, a relentless piano playing in the waiting of a tragic end; It's not the Elton of the first era, the sound is more artificial, but the piano playing is incredible, I love it!

3)  Talking Old Soldiers  From Tumbleweed, Elton and piano at his best, I love this song, too. Bernie's lyrics are so touching and piano and voice are only all we need, nothing else. No match. The best track of Elton and a solo piano, a masterpiece.

2) My father's Gun     Another great song from a terrific album "Tumbleweed Connection". The imagine of the old West, with a very elaborated production by Buckmaster and Dudgeon, Elton seems really an American songwriter in this project. Paul Buckmaster did a fantastic job on this track, unbelievable. 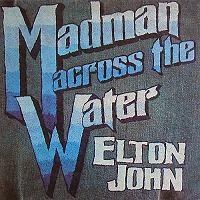 1) Indian Sunset    And now, the n° 1!  A masterpiece from my favourite all time album   A fantastic mix: beautiful song, beautiful lyrics, Paul Buckmaster at his best with orchestral production, Gus Dudgeon as the boss, great musicians, the gem from Madman Across The Water.  For me, the ultimate song from the real, true Elton before the changing towards a popstar stardom. Every time this track moves me to tears.