Mansfield: The Magic Of Peter Pan! 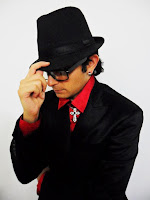 Fantastico! Incredibile! Some people seems touched by God! He decided to pay homage to his idol singing his songs, playing the piano like him, dressing as close as him. A live tribute to Elton. "The magic of Bernie's and Elton's works takes place every time I get the stage whispering such words like "It's a little bit funny.." or "Hold me closer tiny dancer"", he likes to explain; "in that instant the magic explodes". The magic explodes today too. He is ready to deliver an extraordinary performance with a percussionist. So, Eltonites, first, welcome to 2012 AllSongsList year. Just I thought I had to invite someone very special for this ocasion. So please, a standing ovation for this talented boy: Giuseppe Franco, "Mansfield"!!!!

Thanks so much for the acceptation, really an honour to have you here. Which are your most beautiful memories of your childhood, Giuseppe? How it was growing up in Messina, Italy?

I was very shy. You wouldn’t believe but I was. I’d divide my childhood into two great periods. The first one, in which I did what every single child is supposed to do : playing soccer, tennis , studying, watching cartoons etc.. The second period, when I was 11 years old, was a very strange and melancholy time. Due to the loss of my grandfather I loved so much, I became more and more shy and hermetic. At that time my friends were cds. Music became my best friend. Although it might seem quiet depressive a childhood like that (lol) I miss the tenderness of that time. I feel like Peter Pan.

Great! And when did you become an Eltonite? Remember the first time you heard Elton's music and what moves you to buy his music?

It was in 1997. Candle in the wind and Lady Diana’s Funeral. Elton’s voice moved me. The first album I bought was “The Big picture”. Since then I tried to buy everything about Elton and now I have a huge collection.

Well, I love piano and eccentricity and he’s the perfect mixture of both.

What was it like seeing Elton for the first time and how many concerts have you been? 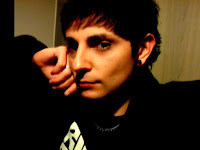 The first time I saw Elton in concert was in 2000, “An evening with Elton John solo” in Brescia, June 20th. He wore a yellow suit and I remember perfectly the feelings of that evening. I cried during “The greatest discovery”. I couldn’t believe to be in front of my idol. And I got my first (of six) autographs after Crocodile Rock. As Elton sings in the “Union”, “A dream come true”.

As we said before, you’re a great collector, with a nice selection of items. But which is your Elton's item that you really appreciate, for being hard to get or for the happiness you´ve got to have it?

It’s very hard to say. I’m concentrating on the international vinyl versions of Empty sky. Probably this is the part of my collection I love much.

I am pretty sure you’re a die hard fan of music charts. Is that so? In your mansfield altervista website I learn Elton’s chart successes all over the world, in Hungary, Finland, Brazil. What surprised you most about Elton’s chart results?

Elton’s chart results are very strange. When he used to have success in America he didn’t have in the rest of the world and vice versa. Only in the time which goes from 1992 since 1997 he had success both in the USA and in the rest of the world. Nowadays it seems Elton’s come back to the origins. As you know “The Union” had a good success in America and not in the other countries.

Oh, why do you hate “Leather Jackets” song? It’s Elton’s worst song, almost for you?

I don’t like it so much but I don’t hate it. I think the worst songs are “I’m your robot” and “Li’l ‘frigerator”. I can’t stand them.

How did you decided to become an Elton tribute artist? I saw a video of you playing an awesome rendition of “Wonderful Tonight”, by Eric Clapton. Do you like to play other artists? 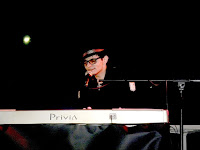 Yes I really like playing other artists like Clapton, Lou Reed, Beatles, Pink Floyd. I even played “Will you still love me tomorrow” in one of my latest concert (not tribute show). I obviously decided to become an Elton tribute artist just to pay homage to Elton and because I’m very good at this. All of my friends told me my voice sounds like Elton’s voice of the first 70s.

How do you choose the set list and which songs become a part of the set? Any obscure song, you play? Do you specialize in a particular Elton era?

Apart of a few friends, like Andrea Grasso (you probably know), who are fans of Elton, I have to play for a general audience who knows only the greatest hits.
But I always prepare a set list similar to Elton’s ones. And I always play some obscure and not well-known songs every time. Some examples ? “Lady what’s tomorrow”, “Where to now St. Peter”, “Roy Rogers”.

Andrea, a true eltonite too! Wow!!! And which song is harder to sing? Some you tried and finally dropped? Some you were surprised about audiences reaction?

Songs like “Sorry seems to be the hardest word” , “Your song” or “Rocket man” have always got beautiful audience reactions. The people remain silent when I play songs like “Sixty years on”, “Tiny dancer” or “Border song” because they don’t know them. But I enjoy playing them.

You are doing all different type of shows: "An evening with Mansfield", a solo piano show, "Mansfield & the Jets", playing with a band. But now you’re ready to debut a show with a percussionist. Explain us please, a little bit, what you are preparing. It will be a kinda live show as Elton and Ray Cooper did? You will sing first and then added the percussionist? Something you could share with us?

First of all I’m not Elton and Roberto is not Ray Cooper :) . I think it’s impossible to reproduce perfectly the “Elton & Ray” shows, which I consider the best shows in Elton’s career. They are two brilliant and incredible artists. But I will do my utmost. The show begins with three songs I play on my own “Your song”, “Sixty years on” and “Sorry seems to be..”. Then Roberto’s percussions will join me. The set list features “Roy Rogers”, Don’t let the sun go down on me”, “I don’t wanna go on with you like that”, “Border song”, “Sacrifice”, Where to now St. Peter” and many others. The audience will enjoy the show.

Sure!! Explain to us a bit about the Jets, the band you perform with.

One of the “jets” has moved for another city in the north of Italy so there’s just one “jet” left eheh. I have to search for a new one. But I have to say I had a great time with Roberto La Fauci (the missing one..) and Roberto Mento. They are excellent musicians.

You have your own songs too. Which is the sequence in your way of composition? Do you have a lyricist? 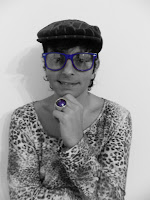 I had a lyricist, in London, who used to send me the lyrics by mail. I found it very easy to put music on the lyrics. But when I write my own song I don’t follow a sequence. I write the music and the lyric at the same time. I know it’s probably wrong and not professional but I follow my sensations.

That's it, then! I like “Rain”, but I am absolutely in love with “Deeply”. What’s the story behind this song?

I wrote both music and lyric of these songs. “Rain” talks about madness and I was inspired reading Emily Dickinson. “Deeply” is about one of my love stories which ended badly years ago. Now I consider “zero-nothing” the subject of that story but I like the song. I did a great job :)

Right! You put music into Bernie’s “Dogs in the kitchen” lyrics. It’s not quite difficult to imagine the responsability to wrote that, but you did a superb job. Doing that, was it as difficult as I suppose?

You think? Thanks ! I don’t how it sounded in the version I did, ahah. There are many things I’ve done in the past I can’t remember. And “Dogs in the kitchen” is one of them. Neither I do have my own version. lol

I highly recommend your website, that’s on http://www.eltonjohntribute.it/ What could we find there?

Photos, news, and the tube-channel with my performances. You can also find me on Facebook : EltonJohn Tribute.

I read Stephen King and I really love Horror cinema. I study at University, English and Spanish languages and literatures.

What kind of place do you see for Elton John in the History of Rock Music?

The top-3 with Beatles and Evis. 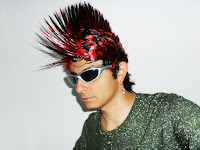 Oh my God, what I difficult question! I will try !

Thanks! Would you want to add some observation or suggestion, or something you want to say to other eltonites?

We are a great family. God bless you all! Keep on loving this World which is falling down.. Let’s fight all together against homophobia and racism. None of us is God, so we can’t decide not even judge someone else’s life. I believe in a World in which people are called by name and not by sexual orientations.

Well, thanks so much to our guest. Mansfield, it was so nice doing this interview with you, very interesting. The Weekend Of Mansfield just began. Eltonites, for those who can, don't miss the live performance of Mansfield with percussionist Roberto Mento. Where? The Room. Via I Settembre, 98123 Messina, Italy. When? Saturday, 28th January, 2012 at 9:30pm.

You're welcome, have a nice day, and let the magic explode! Don't miss that Eltonites, believe me, don't miss! Meanwhile, check out this. Ciao!!!


Mansfield And The Jets

Pictures and video courtesy of Mansfield
by Jackrabbit on 12:38 pm

Etiquetes: Eltonites' Have Talent, The Weekend Of...