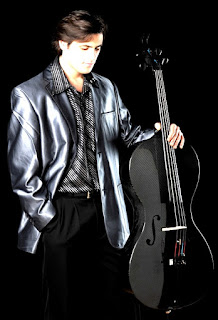 Hi Eltonites!!! Welcome to the Christmas series in AllSongsList. There's no better way to celebrate Xmas time with special guests, talking about their careers, about Elton. The first guest is one of the last musicians to debut on Elton's band. He's so young but he has a long list of awards and prizes. Along with his croatian friend, Luka Sulic, they surprised the whole world with their ability to cover some of the most famous tunes of pop and rock music with their own style. As you maybe guess, we're talking about cellist Stjepan Hauser, our guest of the weekend. But we could not leave Jack Rabbit alone with all of that responsibility, so I thought about inviting one of the eltonites we could find out there, so thanks Paul Purcell for being here and for your help. Ok, we will have Stjepan here in a few minutes, what we could say about him, Paul? "Its great that he and his colleague Luka are in the band at the moment. They are so talented and bring great enthusiasm to proceedings". True! "As Paul Buckmater did a lot of Elton's orchestral arrangements over the years and he himself being a cellist, it's like Elton has gone full circle". Certainly it is. "When you hear Your Song, Tiny Dancer, Holiday Inn and the other songs with his arrangements in concert now, they are creating a sound that only those string instruments can produce. And allbeit on a smaller scale, its like the full orchestral sound that those records wonderfully had. Plus you have added a fuller, more dramatic sound to newer songs, especially Gone To Shiloh, which now sounds out of this world live. So this years tour has been very enriching for all us diehard Eltonites!!". Oh, yes, absolutely, Paul.

Well, everything is ready. We first interview him before the Las Vegas shows, and found Stjepan so excited about the new experience. After that and before the Australian tour, Stjepan talked with Jack Rabbit about the experience. As a Xmas gift for us eltonites, the doors of AllSongsList are all wide-open, more than ever, to receive the unique, the sensational... Stjepan Hauser!!!!!

Welcome Stjepan, so wonderful to have you here, thanks for coming. Let's start then. Which are your most beautiful memories of your childhood? And how it was growing up in Pula, Croatia?

I have only the most beautiful memories from my childhood, my parents are very special people and their way of life and thinking is extraordinary. They liked adventures so I spent most of my time in nature and by the seaside! First time I started walking it was on the rocks by the sea, so when I came to the city I couldnt really walk on the straight normal streets! Music and arts was always the most important in my family, so I was influenced since early childhood.

That's fantastic! What attracted you to cello? Was this the first instrument you learned to play?

I was really little when I first heard it on the radio, and as soon as I heard it I could feel very special vibe, sound was so gentle and warm, like a human voice, and I knew straight away this is the only instrument I want to play!

Who are your musical influences? I am a Jacqueline du Pré admirer. She once said: "Playing lifts you out of yourself into a delirious place”. Do you feel the same way?

Jacqueline du Pre was my biggest influence in my high school days, I was completely obsessed with her. She was extraordinary, her power of expression was so natural and touching it made me cry. Later on I was influenced by Shafran and Rostropovich.

What kind of training do you think cellists should be getting at this time?

Cellists, and classical musicians in general should listen and be influenced by all kinds of music and arts. For example, I learned more from people like Elton about music than from most of the cello teachers.

Cello is actually the only instrument that you play entirely while sitting down. How this fact phsychologically influences a cellist in a performance?

Cellist has to find the most comfortable and natural way while playing the cello, and they have to be relaxed. Sometimes it is very boring for me to seat down all the time, so I started more and more often standing up on concerts and even walking on stage! I would like to create a special belt that I could be completely mobile while playing!

You worked with and impressed the most revered cellists such as Mstislav Rostropovich. And you were one of the last students he taught. What surprises you most about him?

He was truly a living legend. His charisma, experience and knowledge were something else! His friends were most influental musicians of 20th century such as Shostakovich, Prokofieff and Britten... Thanks to him cello repertoire expanded and became a proper solo instrument. Meeting him, it was a dream come true.

Why the transition between the classical music to the modern pop-rock music? Your adaptability in a wide range of musical styles is admirable, and your Michael Jackson’s “Smooth Criminal” is on the top views of youtube really. 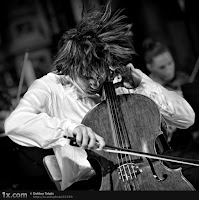 When playing only classical music on cello, you use only one aspect of using the instrument, but cello can do so many amazing things and I felt it is a crime just to use it for one sort of thing. Cello can sound like a violin, like guitar, double bass, percussion... It can rock so hard and be the coolest instrument, and I simply wanted to show to the world what cello can do and use all its possibilities! And now when I am young and full of energy and adrenaline I feel like I wanna rock all the time! Also, we love all the great music, music is universal and the only thing that matters is emotion and message of the music. No one can convience me that movement from for example Chopin is deeper or more meaningful that some U2 song.

Other genious master, Elton John, went crazy after hearing your music. And he met you. Can you tell us about that meeting? And what is Elton like on a personal level?

Elton is the most generous and nicest person you can meet! We played already 30 concerts together and became a close friends. Can’t wait to continue touring with him in September!

Have you been an Elton fan before? Remember the first time you heard Elton’s music and what moves you to buy his music, in that case? 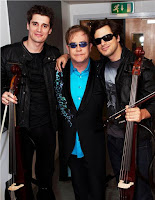 He is a living legend, an icon and everyone knows his legendary songs!

He asked you and Luka Sulic to join forces on his summer tour. What it will consist this collaboration? What type of music you will offer to the audiences? And what do you thought first about the offer?

We play together with him 13 song as well as open every of his shows with our stuff! Cello really fits well in his songs as many of his songs have signature strings parts, and especially those slow songs like Your song, Sorry seems to be the hardest word, we do it only with him on piano and cello, it adds extra dimension, it sounds so intimate and romantic.

Together with the Slovenian violinist Lana Trotovsek and Japanese pianist Yoko Misumi, you are a member of renowned The Greenwich Trio. It was described by legendary cellist Bernard Greenhouse as the "New Beaux Arts Trio". Then, how could you describe this excellent and award-winning band? And how many gigs do you have in your agenda?

Well we played together hundreds of concerts every year, and were all the time together but now after all this chaos started with Luka we had to stop for the moment, but I hope to get together again one day, they are both incredible musicians and best friends and chamber music is something I really miss!

What would you like the future to have in store for you?

I would like to attract as any people as possible to the cello and great music, especially kids who are listening rubbish at home!

I love walking long distances, unfortunately there is no time for that anymore..

Oh, finally, could you tell me your five favourite Elton's songs in running order, for my AllSongsList, where I tried to find the best of his songs ever?

I love Your Song, Sacrifice, Funeral for a friend/Love lies bleeding, ...

The Million Dollar Piano Shows began in Las Vegas with great reviews. There was Ray Cooper with the band too, the background vocalists. Which are your first thoughts of that shows? 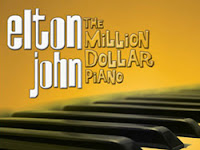 Vegas was amazing! Shows and choice of songs were great, stage and lighting extraordinary, the best so far, and audience was very enthusiastic! Elton was very happy with the shows, he said himself it is the highlight of his career! At the moment we are touring and opening for him in Europe, and will be touring with him until Christmas in Ukraine, Russia, Slovenia, Singapore, Indonesia, New Zealand, Australia,... After we finish touring with him we have our own shows in Croatia, Japan and Korea!

Thanks so much, Stjepan. It has been an awesome experience to be here with you. I wish you all the best in the future, in your career. I also wish you a Happy Xmas, with joy, tenderness, and happiness. Paul? I wish you Stjepan and your family a very happy Christmas and a peaceful new year too. Thanks so much to you Paul, for your help. Do you want to add something else, Stjepan?

I wish Marry Christmas to all the Eltonites and looking forward to seeing them on some of the future shows!!

Magnificient!!! Thanks so much, we really appreciate your words. But before you go, here's somebody you know very well, an adorable person, who wants to say something about you:

Lana Trotovsek, musician: "Stjepan's playing is so natural, interesting, beautiful, passionate, innovative and warm. All these things are reflection of who he is, his personality. I played with Stjepan for 5 years. It was the most amazing experience; it made me think about music in a different way and made me into the musician I am today" 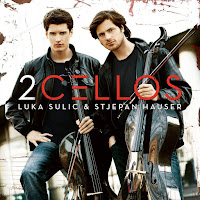 Thanks by heart, Lana for being here on Stjepan's Xmas time. Eltonites, the Xmas series will go ahead. Meanwhile, let me recommend this fantastic album as a Xmas gift for who appreciates the music. The album contains unique arrangements of Rock and Pop anthems, plus a few surprises. Features 'Use Somebody', 'With Or Without You', 'Smells Like Teen Spirit' and many more. Available on amazon.com
by Jackrabbit on 5:42 pm