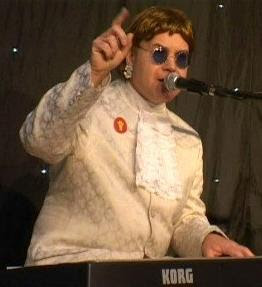 "I just saw him live in Thame, brilliant !!! just like being with my old mate, great band too". When record producer Stuart Epps says words like these of a new talented artist, we must take a listen. And the listen is surprising: he has an extraordinarily similar singing voice to Elton’s. But more than this, his staging is fantastic, including all the costumes needed to reflect Elton’s flamboyant stage presence and style. Some tribute artists look like their idol, he sounds like his idol. Paul Bacon aka Ultimate Elton, is a lifelong Elton John fan. He first started singing and performing Elton’s songs whilst studying Performing Arts at University, in the early 1980’s. Having worked in the corporate events industry for almost 20 years, producing everything from sales conferences, product launches, awards ceremonies... he decided at the start of 2009, to do something completely different and invested his time and money in creating the Ultimate Elton John tribute. Since that time, the shows have got bigger, the costumes more spectacular and the platforms even higher. He is available for shows both large and small, including themed parties, corporate events, weddings and all family celebrations. Also, he has been delighted to help with Children in Need, Help for Heroes, and the London and Slough run for homeless people. 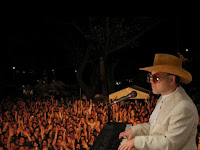 He performs solo with backing tracks for a ‘full band’ sound, or with his four-piece band, Blue Moves, for a fully live sound with drums, bass guitar, keyboards and lead/rhythm guitar. The set list comprises an extensive repertoire from every period of Elton’s career: since hits like "Can You Feel The Love Tonight", "Philadelphia Freedom" or "Goodbye Yellow Brick Road" to tracks like "Teacher I Need You", "Made In England", "Blues For My Baby And Me" or "Cold As Christmas", for example. "It's an absolute joy to perform so many wonderful songs including Crocodile Rock, Rocket Man, Your Song and Candle in the Wind" he explains, while adding "as well as other classics such as Tiny Dancer, Honky Cat, Daniel, I’m Still Standing, Don’t let the Sun go Down on Me and Bennie and the Jets, and to share in the love and appreciation that audiences have towards Sir Elton and his music". His new music video "I'm Still Standing", created by Paul Bacon, Lucina Pearson & Will Howes, is available on: