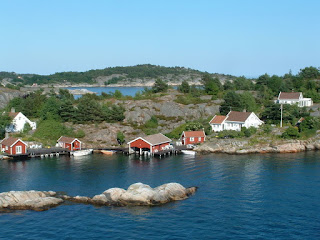 Hi Eltonites!! Today is a very special day. I've been so lucky to meet eltonites around the world, as I did with our guest today. The day he was born, Elton was delivering a succesful concert in Pittsbourgh, PA, as part of The Breaking Hearts Tour, with memorable pieces like "One More Arrow", "Who Wears These Shoes" or "Kiss The Bride". No Jack Rabbit, you didn't have to go to Scandinavia this time, our guest is living here, in our country. My God! Well as I've been saying, our guest is a very special person, an extraordinary man. Good sense of humour, loyalty until the end to Elton, and frank talk. So, while Old Rabbit is in Scandinavia, let's open the AllSongList doors open-wided to receive the one and only, the incredible... Andreas Moland Bendixen!!!

Hello, Andreas. Thanks so much for the acceptation and welcome to the blogsite. I am so proud to have you here and nice to see you again. Could you tell us, please more, who are you?

Thanks Miquel for letting me participate on your great webside! My name is Andreas and I was born in the south of Norway 27 years ago. I moved to Catalunya in 2008 after I met my Catalan girlfriend, Mariona.

The first time I heard, or at least remember hearing Elton’s music, I was making cookies with my mother! I was 10 years old and the songs from “The Lion King” were getting tremendous airplay in Norway, like everywhere else in the world. I had noticed “Can You Feel the Love Tonight” in particular, but had no idea who the artist was. That evening as I was helping my mum with cookies, she asked me to turn some music on the stereo. I asked what she would like to hear. “Elton John” she said. I put on the blue “Very Best of Elton John”, with that awesome picture, and I loved every single song. Later, from my mum again, I learned that the singer from “The Lion King” was the same person, and I realized the man was very, very special.

I suppose the central strength, or important talent of any artist is the voice. To me, that might be the strongest point about Elton. He has given us a spectrum of different voices over the years, just listen to an album such as “Jump Up!”. There are at least 3 different voices presented here, and all on one album!

Yes true. What was it like seeing Elton for the first time and how many concerts have you been?

It was more than I expected, for sure! It was in 1995 and I remember thinking that he ROCKED more than I thought he would. He delivered “The Last Song” which he used to do live, and I cried! I didn’t know that song at that point, but that may be the most vivid memory I have from that concert. And it was great to hear “Lies” as well. By next month, I will have seen 22 concerts.

And which could be a great set list, in your opinion? Is there any song that Elton hasn’t played yet, and you think that he should do it? 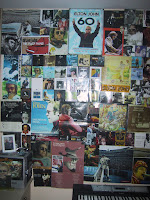 To me, this is almost impossible to answer. I totally enjoy his shows whatever songs he does. And there are some songs which probably don’t allow themselves being played live. I mean, they don’t go down very well live. Elton has outstanding songs like “Pinky”, “Whispers”, “Two Rooms at the End of the World” or “Princess”, but I’m not sure if they would work live. I suppose Elton and his powerhouse of musicians consider this. However, there are songs I think would work live, songs that he has never played before like “You Gotta Love Someone”, “Shoulder holster”, “Chameleon”, “Blues For Baby & Me”. There are many that he has played at one time or another, that would be nice to see back in the set list, like “I Don’t Wanna Go On With You Like That”, “The Last Song”, “Weight of the World”, “Captain & the Kid”, “All Quiet on the Western Front”, “Live Like Horses”, “This Town” or “Suzie (Dramas)”.

Great list, really! Do you prefer the Elton’s solo tours or better with band? And, for you, which member of the band is (or was) irreplaceable? Miss someone, now?

I like any kind of Elton show. They are different sides of Elton, and they complement each other, I think. Regarding Elton’s band… To be honest, I think Elton’s band is at its best now. Nigel would, however, be sorely missed if he was to leave (again)! To me, Charlie Morgan is a fantastic drummer, but Nigel is more unique, I think. He’s a vital part of the classic “Elton sound”.

Which people related to Elton you have met? Have you ever met Elton? 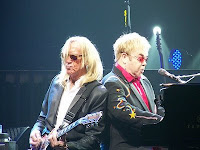 I have never met Elton. I met Clive Franks in Gothenburg in 2005, and he was very nice and funny. I asked him if he ever got nervous before shows, considering that he has a LOT of responsibility. He said “I’m too drunk be afraid”. He didn’t seem drunk to me though. He seemed like just one of the brilliant people working in the Elton world. I met Davey, and he was very down to earth and simple. He came walking down the street and I could recognize him a mile away! I also met “The Storys” a couple of times in 2007, and talked to the members in the band in a stadium in 2007. They told me that Elton had contacted them while in Las Vegas, but they didn’t really spend a lot of time with him, on or off the road. They also explained that life on the road is not as luxurious as we might think – they got from gig to gig in a private car.

I never asked for a signature or photo of neither Clive, Davey or from members of “The Storys”, but I wouldn’t want to. I chatted with them for some time, until I thought it was time to leave. I respect their privacy, and I respect Elton’s privacy. I try not to be one of those fans who constantly contact the management, or nag people around Elton to meet with Elton, or anything like that. My thinking is that I probably wouldn’t enjoy that pressure from fans too much if I were famous, so I try to see it from Elton’s side. I would never say “I’m Elton’s biggest fan”. There are, as we know very well, so many great fans out there.

As you, my friend. Which is your Elton´s item that you really appreciate, for being hard to get or for the happiness you´ve got to have it?

My girlfriend (who is also an Eltonite) and I have collected a number of things since we became fans. I really like our magazines, and LP singles, and the signatures from different concerts.

Fantastic! And your favourite Elton’s albums? Which are the songs that should have been singles but weren’t?

My favourite album has always been “Captain Fantastic”. It was, for some reason, always easier to decide than my favourite songs. As for songs that should have been singles but weren’t I think a lot of people would agree with me when I say “Harmony”. It might be on of my favourite songs of Elton, but again, favourites are pretty hard to decide. I think “Captain & the Kid” is a great song and should have been released as a single as well. To choose a third, I’d say “High Flying Bird”. There are, however, several songs that were released as a single but for some reason, never made it to the top.

What do you think about the “B” sides? Were they good songs, any in particular? 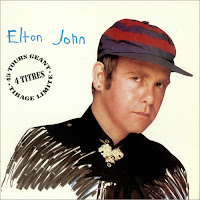 I think Elton always had a lot of great b-sides, but the best of them for me come from the late 70s and early 80s. Strangers, I Cry At Night, Conquer the Sun, The Retreat, Lovesick, etc. They should be put on several discs, it would be several! It's sometimes a temptation to say, why wasn't "So Sad the Renegade" on "Peachtree Road" or why didn't he put "The Retreat" on "21 at 33". Artistically, they are fabolous songs, but they probably didn't belong, or feel right on these albums. It would be nice, however, to see the official release of "Steal Away Child" and all the rest of the b-sides.

Andreas, what do you have done for Elton and, viceversa, what Elton has done for you?

I always like to mention Elton when the chance comes along. I don’t want to do it too much though, because people might think I’m a total fanatic and would always praise Elton. Spreading the good word, I like to call it! Elton introduced me to real music, since I was 10 years old. I really started appreciating music from that point on. It’s because of him that I started playing the piano, which I love so much. If it hadn’t been for Elton, I wouldn’t have met my girlfriend Mariona.

Nice! What kind of place do you see for Elton John in the History of Rock Music?

I see him at a higher position than what he has. I think Elton is underrated, regardless of all the success he has had. It bothers me sometimes that people see that he’s successful, but that’s it. He is actually a very, very talented musician and deserves to be thus considered. He deserves a position at the highest peak, up there with The Beatles and Wolfgang A. Mozart.

Finally, could you tell me your five favorite Elton's songs in running order, for my AllSongsList?

Yes, this is a difficult question. I’d say Bennie & the Jets, Empty Garden, We All Fall In Love Sometimes, The One and Cold.

I love music and I play the piano. As well as The Beatles, Billy Joel, Bob Dylan, Bruce Springsteen and many other artists, I’m a big fan of Woody Allen. I also love bicycling and spending time with my girlfriend.

Thanks so much for sharin' your time with us, Andreas, it has been a pleasure. Send me Old Rabbit when you come to Norway. Take care, all the best.
by Jackrabbit on 12:01 pm