"You make your own Destiny", Claude Bernardin 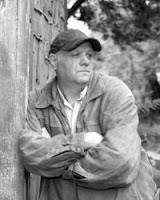 Watercolorist, Author, Poet, Teacher, Husband, Father, and Fan. That's Claude Bernardin. A complete profile. Someone who defines himself as "just a fan", an eltonite: "I have never looked at myself as an authority, just a fan", he told me, but, in my opinion, he's more than this. Co-written with Tom Stanton, Claude’s 1995 book, “Rocket Man : The Music Of Elton John” is one of the most recognized Pop Music books on the Musician according to Billboard Magazine, Amazon.com, and The Rock N’ Roll Hall Of Fame, in Cleveland, Ohio. Few people could talk about Elton John with authority, he could.

"Music was all around me, in every neighbours house. As I grew up, I read every book I could on the subject", he explains. "Rarely missed Rolling Stone Magazine, Billboard magazine I poured over the Charts and the news articles. I loved researching Rock Music". It wasn’t until Billboard magazine, Elton’s people and others started calling him a Rock Music Historian. "I love talking music, and listening to it" he argumeted, while adding: "My past, my history, my experiences have helped me with my views. I could tell you the worst song Elton John ever wrote but I still love it".

Being more concrete, I asked him about Elton's discography: "I demand you listen to "The Elton John" album, "Tumbleweed Connection", "Honky Chateau", "Madman", "Don't Shoot Me", "Goodbye Yellow Brick Road", "Captain Fantastic", "Blue Moves" and "Songs From The West Coast" at least twice before I will talk to you! : )". I thought of him to open the new season, dedicating a "Weekend Of" to him as my particular homage, and he kindly agree to do an interview with Jack Rabbit. And we found a very extraordinary person. Frankly talk, "your site will be a buzz in a few weeks" promised me. "God!". The blogsite always trying to be an open forum where people could express with freedom, like they feel. So the interview is promising. His knowledge about Elton has no question. But, what else we know about him?

Though Bernardin is primarily a shy person, he can be found lecturing to High School Art Students, as an Art Instructor in the Philadelphia Archdiocese School System, or rocking in the front rows at an Elton John Concert. He loves canvassing the hillsides and valleys of Montgomery and Berks county for inspiration.

Claude Bernardin is one of nine children of Doctor Charles W. Bernardin, Longtime professor of Villanova University, ( 1952 – 1986 ), and he was born in West Chester, Pennsylvania, September 21, 1957. He grew up and was raised in the country of nearby Malvern, Chester County, and spent many summers in the Mountains of Hillsgrove, Sullivan County, PA, fishing and swimming along the Loyalsock Creek. He attended Great Valley High School and learned his most serious profession there, studying as a young artist under Chester County Watercolorist Lawrence H. Kuzmin. He received his BFA in 1980, From Temple University and Tyler School Of Art, Philadelphia, Pa.

His first major Professional Painting exhibition in 1986, was in Gramercy Park, Manhattan, NY at the Salmagundi Art Club, upon invitation after receiving the President’s Award for his watercolor, “Work Bench”. Claude has had a successful painting career ever since. A detailed Artist who paints portraits, still lives and scenes of the American Landscape in, watercolor, Bernardin has become one of the more recognized Brandywine/Chester County School Realists. His work specifically is focused on Light and atmosphere, similar to the French Impressionist Claude Monet, whom Bernardin admits, along with Andrew Wyeth, is an influence. "I became an artist because of this man" he said about Wyeth, "hundreds of artists were made better human beings by observing nature, light, texture, emotions, and life around us. Our community was made better by this man, his vision, his father, his son, his family, his poetry and his love. His art is “LOVE”".

So, Bernardin began his career as a Watercolorist in 1971 and has been exhibiting his works for the last 38 years. He has shown in Hawaii, The Virgin Islands, The UK, France, and America. In 1988, he received a Senatorial Citation from Harrisburg, PA. for his : “Distinctively detailed watercolor depictions of the landscapes of Pennsylvania.” Bernardin’s Most popular Watercolor’s in Limited Edition Prints, are “Halloween Snow” , “Heading Home” and “Chester County Christmas.” Some of His most recent works will be featured in a book due out this September called “The 100 Artists of the Brandywine Valley” by Catherine Quillman.

His last Major Solo Exhibition was in Stone Harbor, at Stone Harbor Gallery in 1997. He has shown in over 500 Exhibitions, mostly local to the Tri-State Community he was born and raised in since 1971. He continues to paint and exhibit today. His works can be found in numerous public and private major collections: including - Vangard, Sir Elton John, and The Archdiocese of Philadelphia. He is also a watercolor History buff, and a recognized collector of Antique Art Pottery and Glassware, including Antique Bottles. He is well known for his sunset landscapes, his “Claude Skies” as his audience of collector’s refer to them.

He is currently working on a new series of watercolors for his first one man show in a few years, and several books: "a Horror Novel and a Collectors DVD Book on the History of American Art Pottery". He has most recently added, to creative writing, Poetry to his list of talents: "(I am) working on my first book of 200 Poems to be available for a larger market".

Bernardin has been featured in interviews and articles on Radio, Television, and Numerous Publications Locally, and Worldwide. Billboard Magazine, Rolling Stone Magazine, Goldmine Magazine, The Rock N Roll Hall of Fame, are but a few.

He has painted, demonstrated and lectured to numerous Local Art Organizations and Clubs. And has been a High School Art Instructor, on the High School level in the Philadelphian Archdiocese, for nearly 25 years. He teaches Painting, drawing, graphics, photography, film, Pop Culture, The History Of Pop Music, Art History and much more. He has been featured in Who’s Who In American Teachers over 6 times.

Finally, Claude is married, wife Kathleen, son, Andrew ( b. 1988 ). And Resides in Pottstown, Pennsylvania. He's a good conversionalist. Have I forgot anything, Claude? "I love to laugh. Love Dogs, Glazed Donuts, and the Three Stooges, and Bugs Bunny". Oh, and a favourite quotation?

"I took myself a blue Canoe,
And I floated like a leaf...
Dazzling, dancing, half enchanted,
In my Merlin sleep."

Ladies and gentlemen, the open doors of AllSongsList are all wide open to receive one of us, one of us eltonites, but one of the bests: Mr. Claude Bernardin!!!!

Rocket Man", watercolor by Claude W. Bernardin. From his collection. All the symbols represent the History of the Man's career. All Image rights reserved by the artist, Copyright 2010. Pictures courtesy of Claude Bernardin
by Jackrabbit on 3:39 pm

Etiquetes: Four Of A Kind, The Weekend Of...

I seldom leave comments on blog, but I have been to this post which was recommended by my friend, lots of valuable details, thanks again.

Claude Bernardin is an extraordinary people, a great person. It's always amazing to chat with him. Thanks for your comment and glad you like it