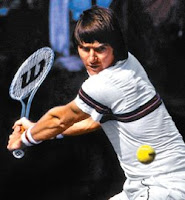 Jimmy Connors he was born James Scott Connors on September 2, 1952, in East St. Louis Illinois. Jimmy Connors won his first title in 1972 in Jacksonville, Florida. He is undoubtedly one of the greatest tennis players of all time: he won Wimbledon twice, in 1974 and 1982, and the Australian Open in 1974, also, he remained unchallenged for thirty years with his 161 weeks at the top of the ATP rankings. While Connors has been an eltonite since the 70s, Elton regarded Jimmy Connors as his Favorite ever Male Tennis Player, so they have mutual admiration and respect.

Born Cynthia Ann Crawford on February 20, 1966, in DeKalb, Illinois, Cindy Crawford was America's most celebrated fashion model and one of the most famous in the world. In 1983, she was a finalist in Elite Model Management's Look of the Year competition. She was discovered by chance by a newspaper photographer, who noticed then 16-year old Cindy at work during her summer job of detasselling corn and took a picture of her. Crawford became one of the first major "supermodels" and has appeared on over more than 600 magazines worldwide including Vogue, W, People, Harper's Bazaar, ELLE and Allure. A friend of Elton and a truly fan, Cindy Crawford and her husband Rande Gerber attended Elton John's birthday party at Hamburger Hamlet in Los Angeles, CA on March 27, 2009.
by Jackrabbit on 1:01 pm