When I took the plane to Munich, I couldn't imagine that I would spend one of the most beatiful weeks of my life. What's a fan convention? well, a get together where we could met another eltonites and talk hours and hours about Elton (really it's hard to do it in my homeplace, lol). Stephan was the leader of a well-organized fan convention. We went to Hard Rock Café to lunch and began to explain our histories about Elton. Everybody had one at least. I understood that we simply love Elton, we are so loyal to him, we adore him. 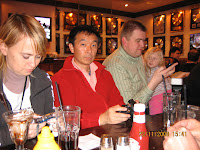 I met people from Japan, Sweden, Ukraine, Switzerland, Spain (of course), France, Israel and Germany. I remember all of them very well, although I didn't had the chance to speak with all of them individually. Also all wore a pin from Hercules and another pin about I-Don't-Know-What-Blogsite-It-Was-Talking-About, some friki eltonite should give them. Ahhhh!!!

I still feel the nervous sensation when we went together to the Munich Olympia Halle. Elton was in a good mood and obviously in form. 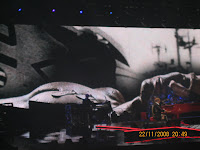 After his lengthy explanation about how he had crossed out the last verse to "Daniel", everybody was laughing about that, and an surprised Elton said "God, your English is soooo goooood". And after the Rocket Man video, Elton joked with the audience and asked them a question: "You know, that wasn't really me in the movie. Was it a) Michael Schumacher, b) Barack Obama or c) Justin Timberlake?". That delighted the audience, everybody was laughing too. All the videos are beatiful and David LaChapelle did a wonderful job, what the video of "Someone Saved My Life Tonight" impressed me. I was waiting that, trying to imagine how LaChapelle would explain Elton's suicide attempt; 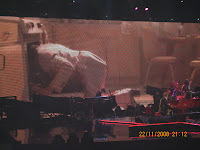 yes, that surreal situation in the line of one of bests Woody Allen's films: the man prpearing the pillow, opening windows, opening the gas oven and putting his head inside. I really liked the "Believe" video too and the fantastic "PinBall Wizard" one. My God, the Red Piano it's rally an spectacular show. 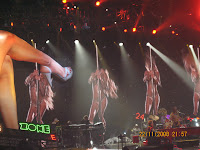 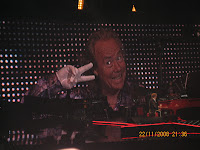 I was so sad because Victoria and Elizabeth couldn't bring the flowers they bought for Elton. And I hear somewhere other people had plans to give a present for Elton without success (you know what I mean dears!!!)

And I couldn't forget three wonderful people I met. They gave me a fantastic weekend, they were so amazing, so friendship and so beatiful. I danced with them and I sang with them all the songs like I never did. I finished exhausted buy happy. That's what it counts for me. My best wishes to them and I really wish I could have a new chance to be at their side other day. Ferran, Brigitte and Anna: since that, you always have a place in my heart. Thank you for being as you are.
by Jackrabbit on 2:46 pm