AllSongsList Got The Chance To Chat With A Great & Well-Known Artist: Old76

Dear Eltonites: it's my pleasure to count here with one of most talented people we could find in Eltonite's world. I really love his art, he's such a fantastic person, I've been privileged to chat a little with him and I am so happy. Please, everybody should get up to receive the only one, the giantic, the fantastic.... Old76!!! 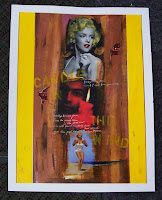 I am a Rocket Man, not the man they think I am at home... Well, seriously, my name is Walter V and I am from Belgium. I lived the past 51 years in Belgium and since the existence of the Elton John Forum, I started to learn another Elton John fan, who is probably more crazy about him than myself.. Mostly everyone, let's say the 'older' EJ forum generation, knows I'm talking about 'suezq'. Since the beginning of this year we're living together in Arizona USA.

When your interest in art began and why did you chose Elton as your inspiration?

My interest in Art started already when I was a young boy, making drawings, painting, collages were my thing. I followed Art lessons and Art history lessons later, but I didn't have much time for it as I also had a busy job at the Brussels Belgian airport being a cargo agent.

My father is also a very gifted landscape painter and he also taught me a couple of things.

I really started to draw in 1988 and over the years I made over 1300 Artworks, if you want to call it that way, in all kind of (mixed) media.

Why Elton John? I have been a fan from him since the early seventies. He participated once in 1970 at the Knokke Music contest, even before he went to the USA I saw something in him although I didn't realize that at the time. Some years later when ROCKET MAN came out, I realized that it was HIM that I saw that day on the television, so my interest grew from day to day.... But it took a few years more to buy the first record of him, GREATEST HITS I, because in the previous years I was a poor boarding school student. That was in 1976, and therefore I chose my nickname on the Elton John Forum to be 'old76'. I also remember that I once had the album GOODBYE YELLOW BRICK ROAD in my hands, but I didn't buy it at that time because my favorite song ROCKET MAN was not on it....

For my artwork I didn't chose him... it HAD to be him. I was so obsessed (in a positive way) with his music and Bernie's lyrics that I had to bring them over on drawing paper, my personal view how I saw the songs. I listened and taped them over and over again, and while I was making my drawings I listened to his music mostly. Some songs and lyrics are very personal, some I try to create my own meaning of them on paper.

Over the years, I made (roughly) 600 drawings and paintings about the Elton John Songs. This September-October I made a lot of collages too.

Which period of Elton's life do you prefer, cause you find it more interesting, in artistic terms ? 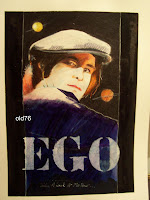 In Artistic terms I personally like to draw Elton mostly with his 1979 look, f.e. when he was in Russia... but I have drawn him in all his different periods. It doesn't matter. The nineties look, 1992-1999, I wasn't crazy about that, but I have done him too then... The Seventies Elton I like the most, and the 2000's Elton too. To express on paper a song I don't have to draw him, I just try to express my meaning about the song, and if anyone else sees something else in it, well, so be it, and that is perfectly fine for me. In fact I like that.

However, this year I have drawn him more than ever before... He was (roughly) in more than 50 percent of my works.

Has Elton known your job? Do you send him some of your piece of arts ?

The answer of both questions is ... from 1988-2007 NO and NO again. It was all personal, I did it for myself as a sort of hobby after a long day's work at the airport.

We handed some of 'old76' prints to Elton on stage to sign and he noticed it. Later a lot of other forum members got some old76 prints signed and went to different concerts with old76 drawings in their T-shirt...

I also made a Birthday card for his 61st birthday, which was presented to him with his favorite flowers, in Las Vegas. Forum members Mary and Nancy organized that all with great success and they have become very good friends of us.

Later there was the Australian LATW event and forum member Erol the Kid gave Elton on stage the Artwork that I especially had made for this event. Elton showed it to the crowd.

Later on I made some poster drawings for Mary for her Orlando LATW. By this way I want to express that she is really one of the greatest Elton John fans in the world in true heart and soul.

Yes, I am a MARK KNOPFLER (DIRE STRAITS) fan, too. I've seen them a few times in concert, as they performed before at the Rock Werchter Festival ground a few times. ROCK WERCHTER is Europe's most popular and best festival and I saw over the years a lot of great artist performing there like PInk Floyd (I'm a fan here too), Rolling Stones, Sting, R.E.M., Bob Dylan, David Bowie and even Michael Jackson, to name a few....

By the way, I live(d) at appox. 1 mile from the Werchter Festivalground.

Finally, also Elton performed in Werchter last year July and ofcourse I was there too. I was a little bit disappointed that he didn't sing JUST LIKE BELGIUM.... LOL, Elton.

So, yes, I make also drawings about other artist's songs.

Which products could we find in your exposition? And what we have to do to buy one of your works ?

Most of my drawings are music related... but I have also made a lot of drawings concerning my travels through Southeast Asia, and it's a little bit funny, but even these drawings I always try to give a music related theme, from Elton or other artists...

If you are interested in some artwork, just contact us via our www.old76.net website. This website is created by my wonderful partner Sue who stands behind me in everything I do and is a true motivation to go further with the things I am doing. Without her, I wouldn't be the same today.

And there is also flickr.com where you can find some of my Artwork and also Suezq's artwork, who is also a beginning but talented watercolor artist.

Finally, could you tell us, please, in running order, your five favourite Elton John songs and why they are special for you?

Through the years I have drawn a lot of EJ songs... some are more special than others. You could say that for almost every EJ song there is something I can find back in my own life....

A special attention also for YOUR SONG, because it is my partner Suezq's favorite and it has now a special meaning for both of us.

Wow!!!! Really I am happy to had you here. It was nice for me and I feel so fortunate. Thank you very much, by heart. Would you want to add something more for the eltonites here?

Thank you for giving me the opportunity to be interviewed. Your website is fantastic!

I strongly recommend it, of course, people!!!!
by Jackrabbit on 2:30 pm