Elton John has done 127 concerts live in New York State while on Tour. 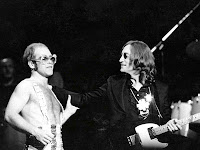 The largest set list was last 60 at 60th, the birthday concert, with 34 songs and the shortest in 1970, while promoting "Elton John" album, with only 10 songs on the set list.

He has played 192 different songs in New York State on Tour.

The song most played is Your Song (with 120 times).

And the rest: Back in the USSA, Circle of life, Crazy water, He'll have to go, I fell like a bullet, I heard it through the grapevine, Idol, Indian sunset, Mama can't buy you love, My way, Part time love, Song for guy, All the nasties, Ballad of a well known gun, Empty sky, Freaks in love, Friends, Grow some funk of your own,
Razor Face, Rock me when he's gone, Rotten peaches, Dixie lily, Made in England, Something about the way you look tonight, A hard days night, (Gotta get) A meal ticket, Honesty, I'm going to be a teenage idol, Lucille, New York state of mind, Pain, Recover your soul, Teacher I need you, The bridge, The wasteland, A word in spanish, Blues never fade away, Close encounters theme, Goodbye Marlon Brando, In the mood, Li'l'frigerator, Nikita, One horse town, One more arrow, Paris, Song for you, The Ballad of Danny Bailey (1909-34), The Captain and the Kid, This town, Tinderbox, Who wears these shoes?, Ball and chain, Chloe, Dear John, Get back, Grimsby, Oh! Susannah!, Where have all the good times gone, You're so static, All that I'm allowed (I'm thankful), American triangle, Answer in the sky, Ballad of the boy in the red shoes, Birds, Bitter fingers, Healing hands, High-flying bird, Little Jeannie, My elusive drug, Original sin, Porch swing in Tupelo, Singin' in the rain, Someday out of the blue, Suzie (Dramas), They call her the cat, Turn out the light when you leave, Weight of the world, Bad side of the moon, Club at the end of the street, Come together, Elderberry wine, I must have lost it on the wind, Just like Noah's Ark, Old 67, Runaway train, Sweet painted lady, When a woman doesn't want you, Whitewash county, Wouldn't have you any other way (NYC), Amoreena, Bite your lip, get up and dance, Brown sugar, Give peace a chance, Happy birthday, It's your thing, Imagine, Jumping jack flash, My father's gun, Runaway child, runaway wild, Sartorial eloquence, Sleeping with the past, Stone's throw from hurtin', Talking old soldiers, Thank you (Falettinme be mice elf agin), Whatever gets you thru the night, White lady white powder, Written in the stars.