Dear eltonites: as you know this is the New York State Week. I have to bring on someone very special. Someone who declares: "I am IN LOVE with Elton John.(And I've had enough people reminding me of the age gap so don't mention it to me!)". She has clear ideas!!! She was born in 1992, when Elton was "The One", and she is from the last generation to become eltonites. Please, the doors of allsongslist are wide open to receive a lovely person, a true eltonite... ej&ef4ever!!!!

Welcome and glad you accept the interview. Could you tell us, please, who are you and where are you from?

Ok! When did you become an Eltonite? Remember the first time you heard Elton's music and what moves you to buy his music?

I first became an Elton fanatic around March of '07, when I got the CD "Greatest Hits 1970-2002" out of the library. I fell in love with all of the songs, even the ones I didn't know. It all followed from there... now I have almost all of his music and I've seen him three times in concert!

The first time I saw Elton was on 6 March, 2008, in Manchester, NH. It was a solo show, and it was absolutley breathtaking. I met up with a few eltonjohn.com forum members before the show started. I tried to get a shirt signed that I had made, but unfortunately did not that time. I made up for it by getting things signed at my next two concerts! :-) I've never been in the front row, but hopefully someday I will get the chance!

I hope you will. What do you think about recent news about Elton doing different kind of live shows, since Solo to Band, Billy Joel and Ray Cooper? Which could be a great set list, then, in your opinion? Is there any song that Elton hasn't played yet, and you think that he should do it?

I'm excited about the new shows Elton is doing, especially those with Ray Cooper. As for a set list, I'm partial to anything from Blue Moves, especially "Tonight" and "One Horse Town."

Well, you know that the week of New York. As you know, Elton found Madison Square Garden the best venue of the world. What have this place for being so special for him?

New York City is a great place. I've only been to MSG once, but not for a concert. Hopefully next time Elton plays there, I'll be in attendance! I would have loved to be there in 1974 when he played with John Lennon - I love both of them very much. 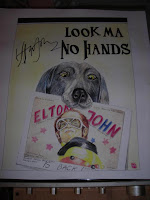 My favorite item is probably the Old76 print I got signed at the concert in Atlantic City, NJ. It was given to me by Old76 and Suezq of the eltonjohn.com forum at my first concert, and I managed to get it signed at my second. It is very special to me.

Wow!!! Finally, could you tell me your five favourite Elton's songs in running order, for my AllSongsList?

These might change if you asked me next week...It's always hard to choose!

I'd like to thank you for asking me to be interviewed, it's an honor.

It was my honour too, Liz. Oh, once you said "at the moment i've got over 400 of his songs on my iPod and I'm working on getting more", which songs are you looking forand couldn't get it? And which ones might to be in an eltonite's ipod for sure?

There isn't too much I don't have anymore...a few albums I have only on vinyl, like 21 at 33, Breaking Hearts, and Leather Jackets. But I feel my collection is pretty comprehensive. As to which ones should be on for sure... I think all of them! :-)

Yes!!! that should be a great ipod's repertoire. Well, that's all. thank you very much Liz. I had great time and it was nice sharing an enjoyable time with you. I really adore you. Thank you and take care.