Around 1976 Alice Cooper and Elton were friends and neighbours. Some members of Elton's band, like Davey Johnstone, Dee Murray or Kiki Dee collaborated with Cooper. When Bernie was apart from Elton, he wrote several lyrics for Cooper, for example "How You Gonna See Me Now?" where Bernie definated himself as a "hobo in the snow".

Alice Cooper was born Vincent Damon Furnier on February 4,1948. He helped to shape the sound and look of heavy metal, and is seen as being the person who "first introduced horror imagery to rock'n'roll, and whose stagecraft and showmanship have permanently transformed the genre". His experience in the sanitarium, for an alcohol treatment, was the inspiration for his 1978 semi-autobiographical album "From The Inside", which Cooper co-wrote with Bernie Taupin. 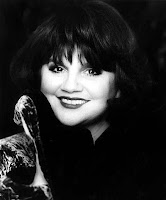 Major criticism and praise involving Ronstadt's politics arose during a July 17, 2004 performance at the Aladdin Theatre for the Performing Arts in Las Vegas. Towards the end of her performance, as she had done across the country, Ronstadt spoke to the audience, praising Fahrenheit 9/11, Michael Moore's documentary film about the Iraq War, and dedicated the song "Desperado" to Moore. Ronstadt's comments, as well as the reactions of some audience members and the hotel, became a topic of discussion nationwide; the incident prompted international headlines and debate on an entertainer's right to express a political opinion from the stage. Following the incident, many friends of Ronstadt's, including The Eagles, immediately canceled their engagement at the Aladdin. Ronstadt also received immediate telegrams of support from her rock 'n' roll friends around the world, such as The Rolling Stones, and Elton John.
by Jackrabbit on 1:05 pm