The Eltonite's Day (XLIII): Ladies & Gentlemen, here we have the fantastic... JumpUp!!!!

Hello Eltonites!!! This week will be The Fan Convention Event in Munich. That's the Germany Week, of course. I thought to bring on someone very special. We could read his thoughts and comments about Elton on the boards. He has good sense of humour... please, eltonites, stand up to receive... the fabulous... JumpUp!!!

Welcome to allSongsList. Could you tell us, more, who are you and where are you from?

Many boardmembers know me via the name JumpUp in Hercules, Eltonjohn.com and in eltonjohnfan.de. I am 17 years old and live in germany.

Great!! When you became an Eltonite? Remember the first time you heard Elton’s music and what moves you to buy his music?

Well, I am playing piano and then you don't have any chance, but to notice Elton John. He has done so much in music business, that you just "fall" over him when you play this instrument

OK! What was it like seeing Elton for the first time and how many concerts have you been? Have you even been front row? And also, could you tell us if you ever have been in touch with him? 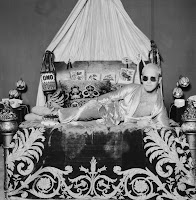 The first concert was in Löwenstein (Klein Heubach) in Germany. It was a really nice location, in a village with just a few hundre inhabitants. I was at the front from (actually I had middle-class tickets, but after the stage rush I stood in the front). The next time I will see him in Munich at the Red Piano show. But more important than that, there will be the Hercules Fan Convention, which I will attend. Beside from Elton I have seen Curt Bisquera, his drummer in 2000 live and talked with him on a music fair. Also I have already been to the lion king in Hamburg. I were recently in New York City, there I wanted to attend the Previews of Billy Elliot, I have bought tickets, but unfortunattly the show had been cancelled, so that's all I have seen of my "idol".

Ahh, before I forget, a friend of mine is a drummer (not really famous, but he has already been dining with Ray Cooper.

Wow!!! Recently we knew about Elton's new projects for the following year, and it was a surprise to see ho much Elton is in form, preparing concerts with Orchestra, with Billy Joel or Ray Cooper, and, although we couldn't expect it, he was again thinking about releasing a new album... What kind of album could you expect and what kind of shows he should give, including the format of the show and the most-wanted set list?

A most wanted setlist would be for me Indian Sunset in it, such a great song. But more than a new album I wish that the old concerts to be released. Sometimes Elton's company gives us parts of the Wembley 84 concert, but I'd like to have the full concert on DVD with great sound. Apart from Wembley 84 there is also Central Park 1980, Dodgers Stadium 1975, Australia 1986 which are not released yet. These are so great concerts, but instead of them we get things like: Greatest Hits 1, Greatest Hits 2, Love songs hits, Rocket Man Hits, Greatest Hits 1970-2002 and so on and so on. This is just moneymaking, which I don't really appreciate.

I want to see Elton performing with Billy Joel, and even better would it be if he takes Ray Cooper in the the band again, playing together with John Mahon would be nice to see. Anyways, I surely don't hope it will be a Hip Hop album, this would just be some Victim of Love all over again.

Which Elton’s appearance on a TV show you remember most, and why?

I watched the tv total thing, it's on youtube, there elton sings a stupid germany song in duet with the host: Here you can have a look at it: http://de.youtube.com/watch?v=t_C5Oqmo4Bw

Thank you!! Could you see Elton’s concerts on TV? And some interview with Elton?

I have seen the Red Piano Broadcast, and I get some english channels, so I could watch Me Myself and I, Into the actors studio and the Diana concert.

Right. Which is your Elton’s item that you really appreciate, for being hard to get or for the happiness you’ve got to have it?

I'd like to have something signed by Elton on a concert, sadly he didn't sign things in Löwenstein, but maybe in Munich...

We hope so!!! You will go to the Fan Convention, then? What do you expect from this meet-event and what would be a dream to come true?

I really like the idea of having this Convention, there will be many international people who I will meet and of course, lots of Elton John fans. A dream would be? Hmm, the Red Piano will be cancelled and instead of that we get a solo concert, which lasts longer. I am not a fan of that show, because I don't definy a show when we're having a screen on the stage and some blown figures.

I always see this on this blog, but I don't have such a list, I can't choose the 5 best Elton's songs, I am sorry. All songs are just to good.

Thank you. Would you want to add some observation or suggestion, or something you want to say to other Eltonites?

If you click on that link, you see it is just some funny thing, nothing serious^^.

Thanks a bunch, JumpUp. Really a pleasure to chat with you. I get funny doing this interview with you, it was an enjoyable and worth experience for me.Thank you. Take care. See you in Munich to the Fan Convention event.