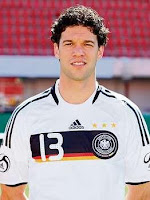 Michael Ballack (born September 26, 1976 in Görlitz, Saxony) is a German footballer. A midfielder, he is the current captain of the German national team, and plays club football for Chelsea in the English Premier League. In all the teams he has played in, he has always possessed the number 13 shirt. In 1995, Ballack earned his first professional contract, thanks to his performances in the role of central midfielder. He was dubbed the "Little Kaiser," in reference to Franz Beckenbauer, who was nicknamed "The Kaiser." His professional debut came on August 4, 1995, on the first day of the new 2. Bundesliga season. Chemnitz lost the game 2-1, against VfB Leipzig. Michael Ballack got a big surprise at his dream wedding when Elton showed up for a surprise performance. Elton flew in especially for the occasion on a private jet and helicopter to perform for the 200 guests. "It was my biggest wish, that Elton John would come," says Ballack. Elton entertained the crowd for almost two hours, playing romantic fan favourites like "Rocket Man" and "Candle in the Wind". The pop legend then topped off the super show by singing a song he had composed especially for Ballack! Elton John said: "Michael, you are my favourite player in the English premier league. You are welcome in my home any time."

Claudia Schiffer was born in Rheinberg, North Rhine-Westphalia, Germany, which is a small town 15 km northeast of Duisburg. She is the daughter of Gudrun and Heinze Schiffer, a lawyer. Schiffer said that she was popular in high school, but felt socially overshadowed by the other girls in her class. She has revealed that because she was so tall, she became very shy and did not want to be noticed. She was also subjected to jealousy by others as she came from a wealthy family that was well-known locally. Schiffer became fluent in French and English. She completed her education and then began to work as a model. She flew out to Paris for a trial photo shoot and soon after she appeared in the cover of French Elle after being well received in Paris. After several other magazine appearances she quickly achieved supermodel status when she was selected by Karl Lagerfeld to become the new face of Chanel. Schiffer went on to become a world-famous supermodel, becoming instantly recognizable with her blue eyes, blond hair and tall figure, now standing at 5ft 11.

Born November 22, 1967 in Leimen, Germany, Boris Becker was the redheaded teenager that took the world by surprise in 1985 by winning Wimbledon - then the youngest male ever to win a major at 17 years, 7 months. He was the first German champion and the first unseeded player to win the Men's Singles Championship. In 1986 he successfully defended his Wimbledon title, stopping Ivan Lendl in the final. At 6 feet, 3 inches, Becker's game featured a big serve, heavy groundstrokes and penetrating volleys. A crowd favorite at Wimbledon, he reached the finals seven times in 10 years (1985-'95). In the 1995 Wimbledon semifinal, he defeated Andre Agassi from a set down and behind 2 service breaks to win 2-6, 7-6(1), 6-4, 7-6(1). But in the final, he couldn't overpower another young American, Pete Sampras. He was also a guest at the English civil-partnership ceremony of Elton John and David Furnish.
by Jackrabbit on 2:23 pm