A Song For Lily-Mae: We Could Make It!!! 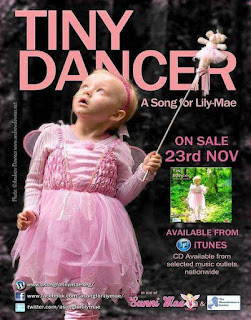 Live is injustice sometimes. Lily-Mae Morrison, from Claregalway, Ireland, is suffering from stage four Neuroblastoma, a childhood cancer of the nervous system. She maybe sleep now, recovering from surgery. Her facebook group reads that she's stable in UCI, out of surgery just yesterday, where main tumor and other 6 smaller tumors were removed. But she is "happy happy happy" now, as she said. Why? Because she is not alone fighting is this. Her parents, her family, her friends. But more than this, she have us!  When we all listen one of Elton's masterpieces, "Tiny Dancer", we think about a little dancer, humming tunes, singing the words she knows. No description is more appropiated than in this case. One of the favourites hobbies of Lily Mae is dancing. So we have it!


That's what more than 200 voices, drawn mostly from the theatre amateur musical world, joined together to pay a very touching and beatiful rendition of Elton's classic song, "Tiny Dancer". All for a good cause: for fighting against this rare cancer. A band and an orchestra, comprising some of bests professional musicians of Ireland, like Declan O'Rourke, Paddy Casey, Camille O'Sullivan, Mundy and John Spillane, plus Julie Feeney and West End performers, were reunited by the incredible Stephen Macken, a professional television cameraman and also, a amateur musical theatre performer, friend of Lily-Mae parents, with the objective to make this song a Number 1 record at Christmas time. You could find this song on itunes, available since 23th November this year, also HMV and all music download services. The funds raised are to cover the costs associated with the recording and also for help Lily Mae in this fight, a rare disease only affects 1 in 100.000 children in Ireland, and had spread to Lily-Mae's bone marrow by the time it was diagnosed.

"Tiny Dancer", written by Bernie Taupin, was originally released in 1971 as a single from Elton's 1971 album "Madman Across The Water". Elton is backing this campaign too. A statement on his official website says: "A very beatiful version of Elton's and Bernie song Tiny Dancer has been recorded in Ireland as a way to raise money for the care of Lily-Mae Morrison, a four year-old  child who has neuroblastoma". So Eltonites, we all must be in this together and help this loving family. Let's make this song a Number 1 record. Just for Lily-Mae, our Tiny Dancer!