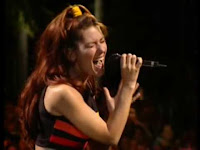 Elton John joined Shania Twain on a soulful versions of "You're Still the One" and "Something About the Way You Look Tonight" for a TV Special, recorded in Miami, FL. Also, she sang "Amneris Letter" from Aida, with Elton playing on the piano.

Elton appeared as a cartoon character on "I'm With Cupid", the fourteenth episode of The Simpsons' tenth season, aired on Valentine's Day. Elton had to land in Springfield because he was unhappy that the chandelier in the dining room in his jet didn't meet his approval. Meanwhile, Apu decided to shower Manjula with many romantic surprises to regain her love for the ocasion. Elton closed the episode with an updated performance of "Your Song" dedicating the song to Manjula "from Apu".

"Dusty, wherever you are, this one's for you, my love, with all my love". Elton included Dusty Springfield's "I Only Want To Be With You" song in the set list to an audience in Peoria, Illinois, in homage to her. She died precisely this date.

Elton performed in support of the VH1 Save The Music charity, an organization who cares music education in US schools. The show's advertising announced "a very special diva you have to see to believe" on the side of great divas like Whitney Houston, Cher, Tina Turner and Brandy. "Elton is the most diva-guy I know" agreed Cher. He premiered two songs from Aida's musical: "Like Father Like Son" and "Written In The Stars", a duet with LeAnn Rimes.

Elton John left hospital in London after surgery to be fitted with a heart pacemaker. "I feel very well. I'm a bit stiff, a bit sore, but everything went really well," he told reporters outside London's Wellington Hospital. The surgical procedure took place after doctors discovered that Elton had an irregular heartbeat.

Previews began for the London West End production of "The Lion King".

Elton joined Rosie O'Donnell on an all-star Christmas duets album benefiting the "All The Kids" Foundation. On her October 13 show, Rosie said this was the most difficult song for her to sing because after Elton recorded his part, she realized that he sang it very slowly.

Elton John made a surprise guest appearance at Sting's concert in Atlanta, GA singing a couple of verses of "Fill Her Up", but he left the stage before the song ended.
by Jackrabbit on 3:38 pm