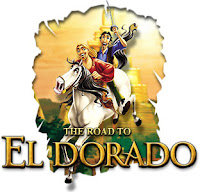 El Dorado Concert at the Venetian Room, Fairmont Hotel in San Francisco, CA. Excerpts from that concert were broadcast on March 19 on the VH1 Network and on March 25 on the Nickelodeon Children's Network. Elton and the band premiered "Someday Out Of The Blue", "El Dorado", "Without Question" and "Friends Never Say Goodbye". 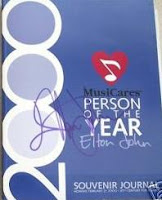 Elton John received MusiCares Person of the Year by the National Academy of Recording Arts & Sciences. The honor recognised the artist's music industry career and philanthropic accomplishments, at a black-tie gala in Hollywood.

Elton contributed backing vocals on Moby's "Why Does My Heart Feel So Bad". The royalties from the sales of the single were donated to the Elton John AIDS Foundation

VH1 cable network's 1 hour biography show: "Elton John: Behind The Music". The promo of the show read: "Elton John talks candidly about his alcohol & cocaine problem, his bout with bulimia, his failed suicide attempts, his relationships with men and women and how he has remained clean and sober for the last 10 years". Also it included interviews with Bernie Taupin, Sting, Jeffrey Katzenberg, Kiki Dee and current band members.

Opening night of Disney's first musical written for the stage on Broadway's Palace Theatre, New York City, NY. "Aida", with music by Elton John and lyrics by Tim Rice, it was directed by Robert Falls ad the choreography was by Wayne Cilento. "How can you emulate something with so much gravitas as a full-blown opera?" said Elton about this project: "We had to do something totally different.". The cast counted with Heather Headley, Adam Pascal, Sherie Scott, among others.

Launch of the official web site for Elton John.

"This Is Your Song: Broadway Sings Elton John" on the New Amsterdam Theatre, New York NY. The theatre's brightest stars came out to sing the songs of Elton John for a one night only celebration to jointly benefit Broadway Cares/Equity Fights AIDS and the Elton John AIDS foundation. Christine Baranski and Nathan Lane hosted the spectacular night which featured such theatrical divas and luminaries as the following singing Elton John's memorable songs: Betty Buckley, Linda Eder, Jennifer Holiday, Sandra Bernhard, Orfeh, Sam Harris, Ann Duquesnay, Victor Garber, Andrea McCardle, Lea DeLaria, Heather Headley, Sherie Rene Scott, Adam Pascal, Jeremy, Kushnier, Mario Canton, Deborah Gibson, Jason Raize. And Elton John himself sang some of his hits: at the start of the second half, Elton appeared in one of the VIP side boxes. He watched most of the second half from there. Making his grand entrance in his "traditional style", Elton marched on stage, leading a pack of buffed buddies, with his diamond covered shoes leading the way while he was singin' "Diamonds Are Girls Best Friends".

An All-Star Tribute To Joni Mitchell, on Hammerstein Ballroom, New York City, NY, Elton played "Free Man In Paris". He said playing a Joni Mitchell song while the author watched was more intimidating than playing for the Queen of England.

Respect, Rainforest Benefit, Carnegie Hall, New York City NY. Elton appeared and stuck out in a white suit and shocking pink shoes. Sting whimsically introduced his fellow Englishman as "my boyfriend Elton John", who twirled a voodoo stick while turning on a gravelly echo of Screamin' Jay Hawkins for "I Put a Spell on You".

Aida was nominated in five categories of the TONY Awards:

The show was overlooked in the Best Musical and Best Book Of A Musical categories. 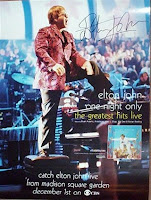 The first of two special nights of "greatest hits" concerts by Elton John, celebrating his career and successful shows at Madison Square Garden.
by Jackrabbit on 12:30 pm