He changed his name, by deed poll, from Reginald Kenneth Dwight to Elton Hercules John. The name came from Elton Dean, a saxophonist, and the late Long John Baldry, a British blues musician. Hercules was the name of the horse in the British television sitcom ‘Steptoe and Son’.

John Reid left his job at EMI Records to become Elton’s manager. When they met, Reid was managing the Tamla-Motown label for EMI. Elton and his mother encouraged him to leave EMI and join Dick James Music as Elton's personal manager.

A session at the Beatles’ Apple Studios in May 1972 brought Elton John and Ringo Starr who joined T.Rex for a unique collaboration on "Tutti Frutti" and "Children of the Revolution", in Marc Bolan's movie "Born To Boogie", released in UK cinemas at the end of December.

Filmmaker Bryan Forbes embarked on creating the film, "Elton John And Bernie Taupin Say Goodbye to Norma Jean and Other Things", a documentary that chronicled the life of a young Elton John and Bernie Taupin at the infancy of their now legendary careers, a project that would take Forbes over a full year to complete. Elton, along with Bernie Taupin, delivered a piano as a gift to the Forbes family in agreement for the deepest dedication in making the documentary. Elton and Bernie dedicated the piece by inscribing on the inside lift: "To Bryan and Nanette, Sarah and Emma with love, lots of success with it, Elton John" with Taupin also writing, "Within this piano lays the ghost of a hundred songs, take care of them, they love you. God Bless from the one who writes the words, Bernie Taupin."

Elton and Keith Moon joined The Beach Boys for an encore.

Elton met Groucho Marx at Malibu California. Elton and John Reid, along with Bernie Taupin and his then wife Maxine, and Bryan Forbes and his wife Nanette Newman rented a house for a month. The comedian called him John Elton because he said it sounded better, to which Elton replied "Don't Shoot Me! I'm only the piano player". 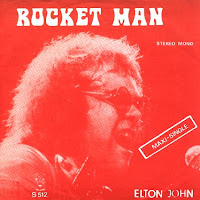 Elton John hits #6 with “Rocket Man”, a song whose words and music make a timely play on the U.S. space program.

Elton awarded a RIAA gold disc in the US for sales worth one million dollars for the Honky Chateau album.

Elton's interview on Disc & Music Echo magazine. He explained about the formation of Rocket Records Company.

"Legs" Larry Smith tap danced in Elton John's song, "I Think I'm Going To Kill Myself". He was the drummer of the comedy satirical rock group the Bonzo Dog Doo-Dah Band and joined Elton's band on tour. At The Forum, he and Elton held a trench-coated duet of "Singin' In The Rain" under a cloud of confetti and lyricist Bernie with a tamborine gold earring and varsity jacket.
by Jackrabbit on 2:14 pm