Elton in 1983 met a girl named Renate in AIR’s London Studios, she was working as tape operator. People around Elton had little notice about she at the beginning, as Philip Norman described in his book, until the “Breaking hearts” sessions when Elton suddenly said “I’m not going unless Renate goes out there too”. In the next tour for Australia and New Zeland the same mystifying ultimate was done: "None without Renate". And finally, Elton declared to bassist Dee Murray: “Guess what man, I am engaged!”. As Norman explained, german Renate emigrated to London at 22, as an act of rebellion against her parents, and in a male-dominating world of recording studios, she had done remarkably well.

The media commented “Elton John who has admitted to being bisexual, is to marry next week”. Their family and closest associates had already heard Elton’s big new on the phone from Sidney. Far from the general astonishment, Bernie, one of the best men along with John Reid, said “I always knew that if Elton suddenly got a bee in his bonnet about wanting a family, it was likely to happen pretty suddenly”. Elton’s mother, Sheila, appeared enthusiastic but Ivy, Elton’s grandmother was thrilled: “I had to take a tablet to calm myself down”. For Renate, Elton was “wonderful, he makes me laugh and he’s very considerate, I am feeling just fabulous”. 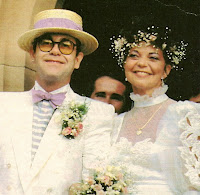 The marriage was on 14 February, St. Valentine’s Day, in an Anglican church in the Sydney suburb of Darling Point, and it was a traditional white wedding. A hundred of wedding guests were specially flown from Britain and America.

The end of the love story was officially on 18 November, 1988, by a “divorce of mutual consent and with no fault attaching to either party”. “Elton’s marriage flickered and went out like a candle in the wind” was Today’s headline.

Since their divorce, with Elton admitting that he was gay, Renate and Elton had little contact. Renate, who received a large sum of money, has kept details of their relationship private and she lives now in a small cottage from a village from Surrey, UK.

One article, headlined "Sad, lonely life of the woman who loved and lost Elton John" and published in June 2000 By GERARD COUZENS on Sunday Mirror, compared “Ms Blauel's current lifestyle with her experiences with her former husband”, and was accompanied by photographs of Renate in a gas petrol station forecourt. The article started with “EX-WIFE RENATE STILL SHUNS SPOTLIGHT AFTER 14 YEARS IN HER RURAL (…) No-one would guess the auburn-haired woman out on a rare shopping trip was once married to Britain's most outrageous rock star”. The article said that “Neighbours in the village know little about her”. Maxine, one local who has got to know her, explained: "She's a lovely lady but a very private person who just wants to be left alone to get on with her life." Another added: "We don't mention Elton's name because we know it still upsets her. The warmth she's found in the village has helped her get back on her feet".

The parting has been described amicable, thought Elton has ackowledged that he deeply hurt Renate. For the articulist, "there's no doubt her failed marriage to Elton is behind the rather reclusive life she leads now. She sincerely believed their marriage was for life."
by Jackrabbit on 10:45 pm

I can really understand her. She must have loved him entirely and trusted that this would be her husband for the whole life. Every time she listens to Eltons music it surely hurts her.
Only God`s love is stronger and can heal her injured heart.