Elton met Caleb Quaye at Paxton’s, a wholesale music distributor and one of his regular stops, and they became friends. Caleb used to use his job as an engineer at Dick James studios, to sneak Elton to record demos: “”I just used a laugh at him (when we met) because he looked like so much like Billy Bunter” said Caleb to Philip Norman. Caleb produced Elton’s first single “I’ve been loving you” and both played with the Bread And Beer band.

Elton asked Quaye to join his band in May 1975. He stayed a years co-writing several tracks for “Blue Moves” album. Elton’s idea was to use Caleb as a second lead guitarrist, counterpointing Davey Johnstone’s technical wizardy with a more visceral bluesy sound. 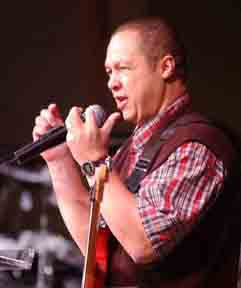 After that, Caleb has worked with Hall & Oates, Long John Baldry and others, until his life changed completely and became an evangelist. October 9, 1978 was the date: “I suddenly heard a voice speak to me and call me by my name to tell me: “Caleb, from this point on everything in your life is going to be different and nothing is going to be the same for you ever again””, explained Caleb on his testimony “The Beginning of a new life!”. “I was so depressed, miserable, and then I heard that voice”. Caleb now relieves that at the moment he was visited by God. It was another two years before Caleb decided to dedicated himself to the church as a result of what happened that evening, and alter a second “visitation”.

He is currently serving as the Chairman of the Nacional Worship Comité as was officially appointed as Nacional Foursquare Music Minister in the spring of 1995.

More info on www.calebquaye.com
by Jackrabbit on 12:32 pm