Hello, Nix. Welcome to the “Breaking Hearts” Week. Nice to “meet” you and thank you very much for the acceptation. Well, it seems that should be difficult to be an eltonite in Croatia. Yes, we have now internet, but before, I don’t know if there was a regular market of Elton’s music, or pop music in general... I am talking about the 70s and 80s, specially. We’ll gonna see...

My name in Nikola and I am from Zagreb, the capital of Croatia. Right now, I am studying Textiles Technology.

Yes, that was a long time ago. I was 10 or 11 years old, back in 1990/1991, when I saw and heard for the first time Elton's video "You Gotta Love Someone". That video was every day, for a few times, on TV and I immediately fell in love with that song and with the whole mood of that video. I had a special feeling that I never had before and it was something like "wow, this guy for sure can make more great music". Still, I was too young to became a fan, I remember, back in 1993/1994, I started to record music from radio on tape. At that time I also heard "Can You Feel The Love Tonight", a song heavenly beautiful to my ears, so I decided to buy it in 1996 the "Love Songs" compilation and, you can't imagine my surprise, when I realised that almost all of the songs that I already recorded from radio a few years ago are in the album. And I couldn't believe that all those songs were composed and performed by the same person. So, I became really interested about Elton's music and my firsts original albums I bought were "Duets" and "Made In England". Also, the first new album I bought after I became a true fan, was "The Big Picture". So, I am an Elton's official fan since 1995/1996 and still today, the song "You Gotta Love Someone" has special place in my heart because it was my first introduction to Elton's music.

Great, but... how was the success of Elton John in your country? Which references had croatians about Elton, specially in the 70s and 80s? Was there a regular market of western pop music? And are there so many eltonites now? 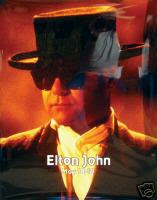 Unfortunately, there are no many Elton fans in Croatia. Actually, I haven't met any true Elton fan in my whole life here, but there are some people that I turned into Elton fan and I know a few people that actually really like Elton's music, but that's still not enough to make Elton popular at all in Croatia. Back in 70's and in the 80's, there was no any real market of western pop music, since Croatia was part of Yugoslavia, which was under communism. Fortunately, that changad since the 90's.
But unfortunately today, many people in Croatia see Elton as an old fat gay who makes saccharine pop ballads and that is enough for many of them to discard him and not giving him any chance for listening to his music; and that I find it really really sad, but I believe that, with better promotion, many people would fall in love with his music.

Sure. And had Elton’s record company published some compilations in your country, over the years, particularly different from other countries? If so, which were the name of the compilations and the tracks in?

I don't think there was any different compilation than in the other countries because compilations published in Croatia are mostly the same as in other European countries.

Ok! 1984 European Express tour arrived to Zagreb for the first time... then, which was your first Elton concert? One of those? and how many concerts have you been?

Unfortunately, Elton was never in Croatia since I became his fan, so I never got the pportunity to see him performing live, but I would really like to see him at least once at concert.

I hope so. Which is your Elton's item that you really appreciate, for being hard to get or for the happiness you've got to have it?

I don't own any special memorabilia, but Elton's albums, B-sides, rare songs and collecting everything that has anything with his music is my passion. I also have a book: "A Visual Documentary" by Nigel Goodall, which was a big help to me, because before I got internet, I really had very little information about Elton’s news, music, life etc. 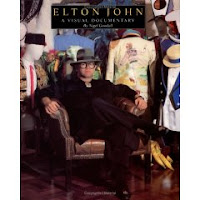 Perfect. Well, you know that is the week of “Breaking Hearts” so, what is your opinion about the album? And the fact that was the last time Davey, Nigel and Dee joined in the album’s sessions (apart from the backing vocals of “Reg Strikes Back”)? Do you think, as me, that tose single’s videoclips remainded one of the bests in Elton’s career, for being so creative and with Elton’s 100% implication, dancin’ (“Who Wears These Shoes?) and even jumpin’ from a helicopter or jumpin’ to the sea (“Passengers”)?

"Breaking Hearts" is a typical and good Elton 80's album with catchy and funny songs. I agree that videos’ singles from this album are very interesting, especially funny "Passengers", especially the part where Elton is jumping into the sea. I must admit
that I was never a big fan of the song or the video for "Who Wears These Shoes", but, still watching that video, with Elton's weird wig on head while running around, always makes me laugh :) Overall, “Breaking Hearts” is one of Elton's better 80's albums, it is very easy for listening and very inspired IMO. My favourite songs are "Sad Songs", "Did He Shoot Her" and "Breaking Hearts", while the rest are very good. Backing vocals are also more notable than on any other Elton's albums and that is also what makes especially "Sad Songs", one of Elton's best and most optimistic songs he ever wrote.

That is really really hard, but I will try:
1. your song
2. live like horses
3. I guess that's why they call it the blues
4. goodbye yellow brick road
5. skyline pigeon

Thank you. Oh, once you told “I understand that many people like 70'es more than the rest of his career, but trying to sell that as truth that 70'es are SO BETTER is starting to be disgusting”… why do you think that?

People who are not familiar with Elton's music are starting to get a wrong impression because many critics and even Elton's fans are trying so hard to prove that Elton's music after the 70's became mediocre and even crap. It's really hard to compare albums like "Honky Chateau" with albums like "The Big Picture" because there are 25 years in between, different music styles and different production, but that is not what makes any album worse or better. Music is what it counts! Because of the wrong approach to some great and underrated 80's and 90's albums, Elton is almost completely discarded today and many people are convinced that Elton is a mediocre musician, what is not even near to the truth. 70's were for sure Elton's gold and most successful era, and back then, he made some of the most inspired and great albums ever, but that still doesn’t mean that some of the 80's and 90's albums, like "Too Low For Zero", "Sleeping With The Past", "Made In England" etc., are not equally great like his best 70's classics. Elton still didn't loose his talent for composing great songs and that is the most important thing. And I think people should stop paying attention to critics and general opinions, they should start actually to LISTEN to his music.

Well, thank you very much, Nicola. Really a pleasure to chat with you. Take care.

Thank you for inviting me to the interview :)

You’re welcome. It was a worth experience.
by Jackrabbit on 3:35 pm

Oh, what a great interview!

I can relate to many things Nikola said. Our first Elton John album was Love Songs, our first studio album after really discovering him was The Big Picture, the last time he came to our countries was before we became fans (I'm from Brazil), and many of his beliefs about Elton's career and popularity are mine too.

It was great to read this interview. The best one ever.