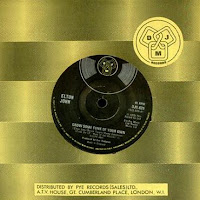 As we know, Bernie has a love of western motifs, and this lyric refers to Robert Ford, the friend of Jesse James who ended up not only betraying the law, but killing him. Described by Bernie as a “knife in the back love song” this is a tale of a man guilt-ridden over heartlessly breaking up with his girlfriend. The symbolism is the bullet that killed Robert Ford.

Philip Norman explained in his “Sir Elton” Book that Elton grew keen on putting it out as the “A” single. It proved a disastrous decision: the song was laboured as well as obscure, and many US radio stations rejected it straight. New Yorker WABC’s programme director recalled the pressure that Elton exerted to try to push the single on to his playlist: “An enormous cake arrived at my office, about half the size of my desk surface” remainded. “On top of it was a decoration in the shape of a gun, and the message “Give Robert Ford a shot!”. But still didn’t play the single. A week later, another cake arrived, this time as big as my desktop. With it was another message: “Disregard previous cake. Grow Some Funk is the A single””.
by Jackrabbit on 10:46 pm