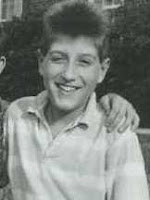 To last the "Sleeping With The Past" week, I would like to pay my little tribute to Ryan White and his story. Ryan gave us a lesson how to be strong, marked the way for people to combat a terrible disease, and disseminated with its case, the chilling reality of millions of people abandoned to their fate by the U.S. government of thereafter. For Ryan and for his mother Jeanne, the continuing struggle.

Ryan's White legacy: "Help me beat the odds and together let’s educate and save the children of tomorrow".

(extract and picture from the biography published on wikipedia)

"Ryan Wayne White (December 6, 1971 – April 8, 1990) was a young man with AIDS from Kokomo, Indiana who became a national spokesman for AIDS, after being expelled from school because of his infection. A lifelong hemophiliac, he became infected with HIV from a tainted blood treatment in 1984 and was given six months to live. White nevertheless tried to return to school, but parents and teachers in Kokomo rallied against him; though doctors said he posed no risk, AIDS was poorly understood at the time. A lengthy legal battle ensued, and media coverage of the struggle made White into a national celebrity and spokesman for AIDS research. (...)Surprising his doctors, White lived 5 years longer than predicted and died shortly before completing high school in April 1990. (...)

On March 29, 1990, several months before his high school class graduated, White entered Riley Hospital for Children in Indianapolis with a respiratory infection. As his condition deteriorated he was placed on a ventilator and sedated. Elton John came and stayed in Indianapolis and the hospital was deluged with calls from well-wishers. White died on April 8, 1990.

Over 1,500 people attended White's funeral on April 11, a standing-room-only event held at the Second Presbyterian Church on Meridian Street in Indianapolis, Indiana. White's pallbearers included Elton John, Howie Long and Phil Donohue. Elton John performed "Skyline Pigeon" at the funeral and also trained the Hamilton Heights High School choir to sing with him. The funeral was also attended by Michael Jackson and First Lady Barbara Bush. The day of the funeral, former president Reagan, who had been widely criticized for failing to address AIDS soon enough, wrote a contrite tribute to White that appeared in The Washington Post. Reagan's statement about AIDS and White's funeral was seen as an indicator of how greatly White had helped change perceptions of AIDS.

White is buried in Cicero, close to the home of his mother, Jeanne. In the year following his death, his grave was vandalized on four occasions.As time passed, however, White's grave became a shrine for his admirers.

In 1992, White's mother founded the national nonprofit Ryan White Foundation. The foundation worked to increase awareness of HIV/AIDS-related issues, with a focus for hemophiliacs like Ryan White, and for families caring for relatives with the disease. The foundation was active throughout the 1990s, with donations reaching $300,000 a year in 1997. Between 1997 and 2000, however, AIDS donations declined nationwide by 21%, and the Ryan White Foundation saw its donation level drop to $100,000 a year. In 2000, White's mother closed the foundation, and merged its remaining assets with AIDS Action, a larger AIDS charity. She became a spokeswoman for AIDS-action and continues to arrange speaking events through the site devoted to her son, Ryan White.com.

White's death inspired Elton John to create the Elton John AIDS Foundation. White also became the inspiration for a handful of popular songs. Elton John wrote "The Last Song" which appears on his album The One in Ryan's memory. Michael Jackson dedicated the song "Gone Too Soon" from his Dangerous album to White, as did '80s pop star Tiffany with the song "Here in My Heart" on her New Inside album".

more info: www.ryanwhite.com
by Jackrabbit on 1:41 am

Ryan is truly unforgettable. AIDS may have taken him off this Earth, but nothing is ever going to remove him from our hearts.