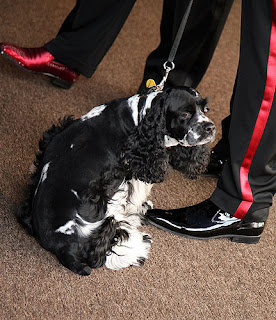 Elton is a dog man. He has had many as pets. Currently owns twenty-one dogs including Border terriers, an Irish wolfhound, a Labrador, German shepherds, and Spaniels. In 1990, Elton adopted a mixed breed named Thomas from a London dog home: “I decided I’d have a dog, so I went to find one at Battersea Dog’s Home” explained Elton then a time he was in personal troubles. “All the dogs in the cages were barking like mad, only one was just lying there, looking as miserable as I felt. I said that’s the one for me”. In the seventies, he also owned several dogs, a parrot, a pet rabbit and some horses. But one is as famous as his master...

Elton owns a Cocker Spaniel named Arthur. In the civil-partnership ceremony of Elton and David Furnish at the Windsor's Guildhall, they were told that pets were not allowed in the premises. So, they made Arthur the "Best Man" to allow the dog to attend, because Arthur is considered part of the Elton family and tours all over the world with them.

Recently, Elton John has posed with his pet dogs for a new charity calendar. In the photo Sir Elton is seen standing proudly with his beloved spaniels Arthur and Marilyn.

But more than this, Arthur is sampled and mentioned in the "Captain And The Kid" album credits – Arthur: woof-bells. Producer Matt Still noted during an interview that in the second track, "Just Like Noah’s Ark", Arthur "barked in the middle of (the recording), because John Mahon was playing a cowbell, and the cowbell freaked him out. So he ran over to John and started barking at him right in the middle of a take. It’s funny, just randomly he happened to hit the beats and he barked in time. So I recorded it and we actually kept him in there." The sampled "woof-bells" can be heard in place of the cow-bell on the track.
by Jackrabbit on 2:20 pm

I have received lots of petitions asking more info about the calendars. The charity calendar entitled 'Pet Pawtraits' , raised money for the animal charity PDSA and was edited in 2006. More info on www.pdsa.org.uk.