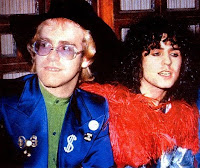 Founder of underground group Tyrannosaurus Rex, he was at the forefront of the Glam Rock era. At first, they were not get along very well because Elton made some rather critical remarks concerning Bolan's music and days later was unceremoniously cornered on the street by Marc who first gave him a tongue lashing and then invited him over to his house. Bolan was killed when a purple Mini Clubman 1275GT driven by his girlfriend Gloria Jones hit a tree. Mourners at his funeral at Golders Green Crematorium included Rod Stewart, Elton John and David Bowie. Flowers and wreaths were sent from Keith Moon, Gary Glitter and Cliff Richard. "I'm Going To Be A Teenage Idol" was inspired and a tribute to Bolan. 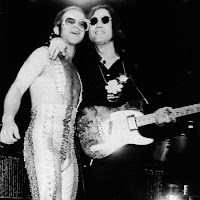 John Lennon was an English musician and singer-songwriter who rose to worldwide fame as one of the founding members of The Beatles, along with his long-time friend Paul McCartney. Lennon was shot by a deranged fan in front of his apartment complex in New York. "I was in Australia" explained Elton, "we went to the cathedral in Melbourne at the same time they had the vigil in New York. We sang hymns and we cried. It was an astonishing time. John really touched my soul." Elton wrote The Man Who Never Died and Empty Garden as a tribute to him. 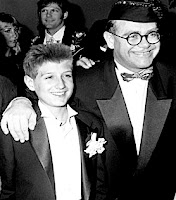 Ryan White acquired HIV/AIDS from a routine blood transfusion in treatment of his hemophilia. After facing discrimination and eventually losing his battle against the newly discovered infliction, his legacy remains an important lesson about humanity and the mistakes people can make when they are ill-informed. Elton, who had maintained a bedside vigil during Ryan's final week, led the congregation in singing a hymn, accompanied himself as he sang his "Skyline Pigeon" then served as a pallbearer. "You never blamed anyone for the illness that ravaged your body or the torment and stigma you endured" wrote Elton on a posthumous letter on the 20th anniversary of his death.

Fronted by Mercury, Queen went on to sell more than 300 million albums internationally, and he composed songs like "Bohemian Rhapsody", "Somebody to Love" or "We Are the Champions". Freddie was the first major rock star to die of the disease. "The year that he died, at Christmas, someone gave me this parcel wrapped in a beautiful pilowcase and inside was a Henry Scott Tuke watercolour ("The Bathers") and it said: Dear Sharon, Thought you'd love this! Melina X", remembered Elton, "it was one of the most touching things anyone's ever done for me". At his funeral, Elton joined the mourners who bid farewell to Freddie. Elton dedicated to him The Show Must Go On in his 1992 live tour.

Before joining Elton John, Murray, and drummer Nigel Olsson, were members of the Spencer Davis Group in 1968 before joining Elton John as his road sidemen in 1970. In 1975, Dee was fired from the band because Elton wanted to achieve a different sound. In the late Eighties, Dee moved to Nashville, where he embarked upon a career in the country music scene. Diagnosed with cancer shortly thereafter, he died of a stroke. "Dee Murray has made huge musical and personal contributions to my life," John said in a statement. He dedicated "That's What Friends Are For" to Dee on a two dates special shows to raise money for his wife and children.
by Jackrabbit on 6:00 am