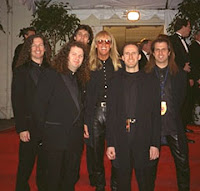 Billy Trudel was born Aug 8, 1960, in Santa Monica, United States. The real first band he joined was called Laser, back in '79, this was right out of high school, and that was a kind of a Journey/Kansas type band, and they did a lot of touring & performing. After that he met up with the guitar player Michael Thompson and they put a band together called Slang, which was a very early edition of what would later become the Michael Thompson Band.

At that point he auditioned for a band that Chrysalis Records had signed, it was called The City. Along with Davey Johnsone and other Elton's band members, they formed the band Warpipes; this was in 1990/91 while Elton John decided to come out of retirement.

He was writing songs for other people, doing some other things and actually was becoming very successful in the studio world. With the principle songwriter and keyboard player David Young, they created Public Domain, and counted with Bruce Watson (guitars), Larry Antonino (bass) & Matt Laug (drums). The album, "Radio Nights" was a 13 song exhibition of classic US FM pop/rock, with passionate ballads and strong lyrics. Elton was a huge fan of the group and even contributed an original song, "Crimes Of Passion" written by him, Bernie Taupin and Davey Johnstone. Precisely with Elton, he ran around the world since 1997, for "The Big Picture Tour" until 2001.

Between 2001-2004 owned Billy Trudel Music, while he was creating and performing material for films and TV. 27 years of experience in music world business let him working with a variety of big-name acts including Patti LaBelle, Diana Ross, Billy Joel, Sting, Rod Stewart and Motley Crue, to name a few.

Also, he now co-owns Smaktones.com, an all original ringtone/tattoo wallpaper site that's pretty cool. It's all about the cell phone and everyone seems to find something they like for their phone.
by Jackrabbit on 2:26 pm