Elton's first tour in two years opened in Wellington, New Zealand. Elton was in a good form and had lost weight, maybe for the long Tennis journements he spent in Antiqua, by the sea. "Teacher I Need You", "(Gotta Get) A Meal Ticket" and "Elton's Song" were on the set list.

"Jump Up!" album was released, and it represented his second Geffen Records offer. The title was inspired by one of the West Indian's expression: an essence of good times by the way. Althought conceived in Paris, the album was produced bu Chris Thomas and recorded at George Martin AIR Studios in Montserrat. The album featured a track written by Tim Rice, "Legal Boys", one song rejected from an Andrew Lloyd Weber project, related to accountants and lawyers that make the situation worse than it has to be, according to the lyric's meaning.

Premiered "Ball and Chain" and "Empty Garden" on Saturday Night Live program. The guest of the programme, Johnny Cash, appeared dressed up like Elton.

Opened the first European tour in Stockholm. The band had again Davey Johnstone, Dee Murray and Nigel Olsson as an unit. In Brussels, Paris and Avignon, he joined "Nobody Wins" with the french version "J'Veux D'la Tendresse", for the delight of the attenders.

Elton had a new 33 years old boyfriend, an Australian guy called Gary Clarke, who accepted Elton's invitation to go to live with him in England and be a part of the route group. In 1996 Clarke explained what it was, in his own words, "a turbulent period of more than a decade and in exotic locations that spanned several continents, (and) experienced the exhilarating highs and devastating lows of an excessive and passionate lifestyle".

Days before Elton's American Tour, he went to Bernie Taupin and then his wife, Toni, at their Californian house to spoke about working in a whole album together, as the old days. The result was "Too Low For Zero".

The American Tour had a fellow Geffen group, The Quarterflash, as the opener of the shows. The tour opened in Denver CO on June 12 and ended in New York City NY on August 7, after a succesful sold-out concerts.

At the first night in Madison Square Garden, Yoko Ono, along with his six years-old son Sean, appeared on the stage after Elton's rendition of "Empty Garden" to told the audience "I want to thank you, I really feel you're all my family". Elton is instead Sean's godfather. 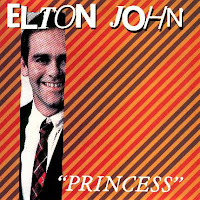 "Princess" was released as an UK single from the album, but it failed to reach the charts. With lyrics by Gary Osborne, it was Elton's message of goodwill to Diana Spencer. Elton met Diana at one of the Royal Family's party and got well since the first view: "You make me smile" read the lyric and realize that "You're one fine lady".

First night of the Hammersmith Odeon Christmas series concerts, counting with Kiki Dee as the special guest freaturing at the end of the show on "Don't Go Breaking My Heart" and on the medley of "Whole Lotta Shakin'", "Jingle Bells", "I Saw Her Standing There" and "Twist And Shout". One of those nights, Nigel Olsson took sick and left an angry Elton only with Davey and Dee Murray, as an unlike trio.
by Jackrabbit on 7:05 am