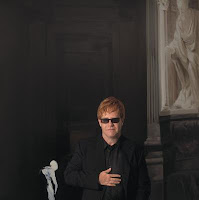 Hello Eltonites!!! The Original Sin Event is reachin' the end. There were hard days of work, writing articles, mailing to everyone related to the event, promoting the idea. It was pretty amazing and a nice experience for me. It started with the intention to do it for Valentines, but we changed the date in order to reach more people.

We still don't know what will happen and which will be the charts results, but, if you asked me about what I like it most about the experiece, I definetely would tell you that: to meet several eltonites, several people, ready for doing everything for Elton. That's quite incredible. I knew we all love Elton, but we had so much people involved in the idea, more than we could think.

I could't close the event without sending a big hug to AnnaBCN, Trang Le and Dagmara Lakomi, who they helped me to develop the idea. To Ferran Tarrasó for the ad he created about the event. To Sydney Mc Ginn for creating a great video about the song, on youtube. To Nigel Coleman who had the great idea to contact George Matlock. To Ulrike Sterling who contacted her local radios explaining what the event was about. To Mic Carlson for adding a very beatiful picture about Elton on the event. To Lyn Nuttall for his help about the charts info. To John F. Higgins and Elizabeth Rosenthal for their thoughts and great opinions about the event. Also, to the musicians related to Elton, former band members or current band members, who encouraged about the idea.

I could not forget the Elton John Official website, specially the editor, for promoting the song on their website, adding a beatiful live video, and for their encouraging words. To George Matlock and Artur Skupienski, from radio ORLA FM, for creating the Elton's Day on their radio station, with the pleasing result to hear great songs on the radio, that not happens very often. To the greatest Stephan Heimbecher for the encouraging words and for promoting the event in the Hercules Website.

And a very special hug and my frankly gratitude too, to all the people and eltonites who help us on the event, inviting friends, sending encouraging messages, downloading the song, sending pictures or posting videos. As I always said, that was a team effort, everyone put his/her part, and we were all together for one reason: because we love Elton. Because we wanted to give him a surprise for his b-day with the song entering at the charts again (gonna see what happen). Please, forgive me if I forget someone to name here: there were several people promoting, mailing, encouraging friends and the list is endless. Thanks all for being in the event.

Now, just wait and see what will be happen. Thanks for being there.

Jack Rabbit
by Jackrabbit on 1:38 pm