Having fun at the "Party Of The Century" 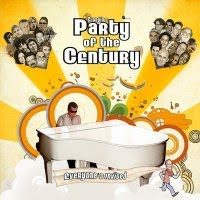 The soon-to-be released album is a joy. It's a nice collection of songs composed by a superb Giorgio Aquilani that gives his best here. Giorgio's writing, on the Party Of The Century album, can be considered "multi-genre", going from British and West Coast pop/rock to jazz and symphonic, but he has a personal style. And he's a very good performer, with his soulful voice, surrounding nice melodies well written by a fabulous Ivan Nossa. I thought about to make my own review of the album, my feelings after hearing that, at least ten times. So let's make a walk to the party:

Giorgio's concept for his new album is the vision of a "big mansion" hosting an unforgettable music party. The night, a ring bell and a party. That’s the beginning of the party. People having fun, talking. Giorgio’s welcome words promise to be ready to rock. And of course he is.

An optimistic song about life, about trusting in oneself. “I hope someday life reads this poem through, then thinks it over, and gives joy back to you” reads Nossa’s lyrics. Life would be so glad of this poem for sure. You could feel goosebumps when you heard John Mahon’s vocals fitting right well with Giorgio’s. They’re performing a strong duet and that would be a winner if they decided to release it as a single.

Black coffee and a friend

Maybe that shoud be the first track after the intro, a rockin’. But it doesn’t matter. It seems a John Lennon tribute. Angelo Anastasio guitar riffs are prominent and with a strong chorus. I love Nossa’s line: “Life is short, times go fast. Only a few things, are made to last”. He’s referring to friendship, obviously.

The best song from the album, from my point of view. It’s my beating heart. Giorgio’s tender voice fits very well with the melancholy of the story. Nossa’s clarividence about times of solitude, finding oneself, “looking at that old dusty mirror searching my old familiar face”. It’s a reflective song and Giorgio captured perfectly the mood.

A nice story penned by Nossa. “You carried the hope for a new world to come, but you just went to war, leaving the peace on that door”, love that line too. The song describes the terrible worrying to have no news about a friend in the front. I could not forget Simon Phillips' drumming, specially reachin’ the end.

A very personal song by Ivan Nossa paying tribute to his grandmother. Surprisingly, Giorgio composed an uptempo tune very optimistic and energetic when, maybe, we were expecting some kind like a funeral anthem. Remarkable the brass section and Vittorio Iuè’s hammond solo.

A powerfully emotional song claiming for the lost of loves, the desperation of another love going away: “will I be better or will I just lose another heart letter”. I love Ludovica Iuè’s work on the backing vocals, adding a tender climax with Giorgio’s nice piano playing notes.

Another pretty good song. Giorgio’s wink to soul, to influences. “I don’t need anything as long as my eyes can look at you” is a wonderful line.

2 hearts in a tattoo

That song really rocks! That’s a masterpiece. I like the vocals sung by Giorgio, as well as the piano. It has a great chorus, and couldn’t stop to singin’ it one time and again. A favourite song growing and growing every time I played it. A single for sure.

The vocal is about the surprises you could find in the other side of the door. You don’t know how they could be until you open it. Bobby Kimball joined Giorgio on this track.

A brilliant track that begs for repeated listens. You can feel the breeze in your face as the music and the lyrics combine. The beatiful orchestral arrangements by Renato Serio reminded me what James Newton-Howard did for Elton’s “Tonight” song. The gorgeous strings are quite beautiful and is a standout on the album for sure.

Nice rendition of Elton’s classic with all Giorgio’s friends singin’ around: John Mahon, Stefano Signorini, Steve Murphy, Simone Borghi, Bobby Kimball, Billy Sherwood, Cherisse Osel, joinin’ together for an Elton John obscure song, but a classic by the way. Giorgio’s rockin' fresh version of "Friends" maybe it’s better than Elton’s original, my God, and that cover should be on Davey Johnstone’s mind, it should be great to see the band playing as here.

Features Joe Gorfinkle sensations of a party that seems to be unrepeatable, or maybe not. That experience should be done again, other time. There’s a real, genuine energy and spirit on this album. Sure recommendable.
by Jackrabbit on 1:15 pm