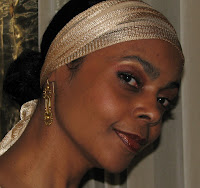 Yes Eltonites. We have the priviledge to have here another girl from the backing vocalists of end 80s and 90s of Elton's band. I really love the richness and smoothness of her voice. She's so special. Marlena Jeter, aka Lena J, started an early age to sing and has worked with such great musicians. Now she has new projects to develop and we are proud to have her to explain it. Ladies and gentlemen, the open doors of AllSongsList are wide-open to receive the talented, fabulous and wonderful: Marlena Jeter!!!!!!!!!!!!!!

Thank you very much for the acceptation. First, I would like to ask you at what age did you decide you wanted to become a musician? What were your musical influences, Marlena?

Age 15 was when I decided to take myself more seriously as a singer.
There were many musical influences in my life from one end of the musical spectrum to another such as: Stevie Wonder, Aretha Franklin, Whitney Houston, as well as Barbra Streisand.

I have loved so many wonderful singers and I believe they have all had their influence in one way or another.

You'd been in a top background female R&B trio, from Los Angeles, called Silk. Silk featured you, Maxi Anderson and Gwen Machu and recorded an RCA album: 'Smooth As Silk' (1977). Did it was the only album released or were more recordings? Is that so?

Unfortunately for Maxi, Gwen & I, we were never released as a recording group. The album you are referring to was another Male group from that time. The three of us were known as “Silk” because we had such a silky sound when we were called to work as background singers on various record projects of mainstream recording artists. Producers loved our sound and as a result we became popular as a recording unit.

Oh, I see... You and Maxi Anderson also collaborated with Japanese artists like Keiko Matsui or bands like Hiroshima, in the 80s...

Yes, it’s true Maxi and I worked on many Keiko and Kazu Matsui projects as well as Hiroshima. We also worked on countless other Japanese artists projects and even traveled to Japan to do even more. It was a very exciting time.

You have been a backup singer for 30 years, singing with George Benson, Linda Ronstadt, Lionel Richie, Laura Pausini, Ricky Martin, Kenny Rogers, Jeffrey Osborne, Rod Stewart or Joe Cocker, to name only a few. Have you been privileged to meet those people, haven't you?

Yes, I have met many of the artists you have mentioned. Some I have traveled with as well.

Ok! Could you tell me how you got involved with Elton and how you ended up recording and touring with him? Also, how do you value that experience from a personal point of view and was it a good starting point for your solo career? And have you been an Elton fan before?

I received a call one day from Davey Johnstone, Elton’s Music Director who had obtained my name from a fellow musician, and he invited me to audition for him. I met with him, along with 2 other ladies, we sang through a few of Elton’s songs, and I later received a call that I had the gig, along with my dear friends Ms. Alex Brown and Ms Natalie Jackson (now known as Kudisan Kai). Shortly thereafter we began touring and in time recording as well.

In reference to me being a fan, I had always loved Elton’s music and was completely thrilled that I was fortunate enough to work with him and his band. Believe me when I say that his band is one of the best! The work ethic in that organization is one I highly respect and I learned a lot during my 7 years of being
a part of it all. The entire “Elton John” experience was life changing for me and I will always treasure those experiences from that time in my life.

Elton writes most of his songs in the studio, that's it? And how many songs you'd been recording for an albums session?
Remember some of the titles that didn't see the light, from the
Sleeping With The Past or The One sessions?

It is pretty typical that artists often record more songs than
necessary because they want to have choices. At this point in time
I cannot remember which songs didn’t make the cut. What I most
remember is that I had a great time doing it and that everyone was
so generous and accommodating.

And how it was touring with Elton and the band? Davey Johnstone became the musical director... How many songs were rehearsed before the tour begins and how the set list was decided?

Touring with Elton and the Band was incredible! Davey Johnstone
was the Music Director when I got in the band. He was my main contact for that gig. In reference to the amount of songs we
rehearsed… I would say that there were at least 20. Once again,
it’s all about having choices and seeing what feels right. As time
goes on with any tour, eventually songs get taken out and others
put in for many different reasons. Most of the time, however, it’s
the artist who dictates these changes.

Any anecdotes you could share with us, from touring' with Elton and the band?

Miguel, I have to say that so many wonderful things were happening for me at that time that it’s not easy to pin point one particular incident that stands out more than another. What I will say is that Elton is a very generous man, and there were times when he would do something thoughtful for one of us or all of us… and he always remembered your birthday! That always put a smile on my face!!!

Wonderful!!! You still been in touch with Kudisan and Mortonette... Would be possible doing something together in the near future? We Eltonites would love that...

I am still in touch with these wonderful singers. Mortonette and I
still do recording sessions together and Kudisan and I are in touch
as well. She however is living in Boston at this time teaching at
the prestigious Berkley School of Music and working on material
for her upcoming album. She sounds great, and I look forward to
hearing what she comes up with!

In reference to doing something together, that would be great, and
something all three of us would be willing to do if an opportunity
presented itself and we could coordinate our schedules.

Then... What about your future projects, Marlena? 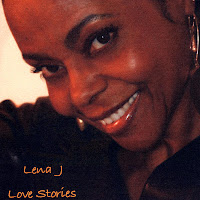 Before I begin, you should know that my artist name is “LENA J”, so in searching for current music on me, that’s where you should look! NOW… I have been co-writing with some really great producers for my new album entitled “Love Stories”. So far I’ve released 4 songs from that project on sites like iTunes, Rhapsody.com, EMusic.com and Amazon.com.

I have written 2 new ones to be released on iTunes in the next few
weeks, that I co-wrote with the multiplatinum producer “KIRV”
who for the past 5 years has been co-producing with Dr. Dre, and
has sold over 20 million records. I have also been working with “BEATMASTA WES” producer of the multiplatinum record selling group “UGK” out of Texas and the response has been incredible!

Most recently I participated on the Historic Dr. Martin Luther King
album project entitled “THE MESSAGE IN MUSIC”. My contribution to that project is entitled “Live The Dream”, cowritten with KIRV, and that album is currently available on iTunes.

Thank you!!! Could you tell me your five favourite Elton's songs in running order, for my AllSongsList?

Would you want to add some observation or suggestion, or
something you want to say to other Eltonites?

It pleases me to know that Elton’s fans are forever! He is a living
legend… and I should know because I’ve been in the Entertainment
Industry for quite some time and have worked with a lot of great
recording artists, but this man still holds a special place in my
heart. His music is eternal and in my experience, he always sounds
great!

It also pleases me to know that you Miguel, as well as other
Eltonites remember “The Girls” as we were referred to back then.
Thank you for caring enough to want to know what we are doing at
this point in time and supporting our efforts as artists! All the best to you.

All the best to you too!!! You've been so nice with me. I really adore you and admired you as a singer. I thought about doing something for you, just to make you smile. Some people wanted to say something about you, so, with all my love, I hope you really enjoy it:

Jonathan Phillip Moffett, drummer: "Thank you for your inquiry. Thank Marlena I send my love and hope that she is well. She is a wonderful woman, person and singer. I think she's very professional and great spirited. Send her my love and best wishes in 2009. Thank you Miquel for reconnecting she and I. I wish you the best in 2009!!!

Charlie Morgan, drummer: I loved all the girls, they were so much fun. I had so much fun on the road with the three girls, especially Marlena. Quite apart from being a sensitive and caring human being (and a good friend), she made sure they put on an amazing spectacle for the fans! An audio-visual treat".

Thank you Jonathan, thank you Charlie for being here and for your words. Marlena, will never forget you!!!
by Jackrabbit on 3:56 pm