Yoko Ono (whose first name translates to "ocean child") was born on February 18, 1933 in Tokyo. Attending the prestigious Sarah Lawrence College in New York, Yoko dropped out to elope with her first husband, Toshi Ichiyanagi. It was while living in New York's artsy Greenwich Village that Yoko discovered the world of avant-garde artists. The she married American jazz musician/film producer Anthony Cox. By this time, Yoko was heavily influenced by the extended and repeated image work of Andy Warhol, Dali inspired surrealism and Dadaesque absurdity. The notoriety of Yoko's events, as well as her involvement with the radical 60's avant garde art collective Fluxus created an interest of her works in the United Kingdom. This interest precipitated her visit to England in 1967. Yoko's life forever changed when she met Beatle John Lennon at an exhibit of her work at the Indica gallery in London. Since John's death, Yoko has remained active, releasing three music albums, engaging in two concert tours and composing two off-Broadway musicals. 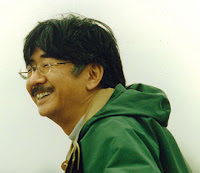 Nobuo Uematsu is a Japanese video game music composer. Uematsu was born on March 21, 1959 in Kochi, Japan. After graduating from Kanagawa University, he composed music for commercials before joining Square Co., Ltd. (now Square Enix Co., Ltd.) in 1986. Since 1987, Uematsu has composed music for every Final Fantasy game, incorporating electronic, rock, and classical elements to each installment. In February 2003, Uematsu formed a group called "The Black Mages," producing a self-titled album composed of FINAL FANTASY battle music arranged in rock style. Uematsu performs as the keyboardist himself. The music from the game series has grown to such notoriety, Nobuo Uematsu was named as one of the "Innovators" in Time Magazine's "Time 100: The Next Wave - Music" feature. He declares musical influenced by Elton John.
by Jackrabbit on 12:25 pm