Eltonites!!! I would like to present you the fantastic, unbelievable... Lee Alverston!!!! 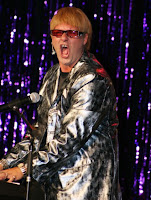 “She packed my bags last night, pre-flight…” I couldn’t believe my eyes and ears when I heard this tune that he was not Elton. Or maybe he was… His tone is surprisingly Eltonish. He's very, very good. His name: Lee Alverson. Completed with sequined costumes, a baby grand piano, sparkly sunglasses and an incredible accent, Lee is an extraordinary entertainer who started his career in Pittsburgh, PA. He has become America's Premier Elton John Impersonator. His performance has been described as "Unbelievable!", and "So close, it's scary!" Lee has also been rated the #1 Elton John Impersonator in the world by United Tribute Artist International. To date, he has performed in 36 states.

AllSongsList is glad to welcome Lee so, please eltonites, get up, stand up and welcome a greatest performer: Lee Alverson.

Thank you very much Lee for your acceptation.

It is my pleasure.

Thanks!! When you first were interested in music and how you decided to become professional?

I discovered my mom's "Meet the Beatles" album in the 70's..when I was a kid... I was hooked and wished I was a Beatle. Moving ahead a few more years... When I was 16, my sister wanted a piano so she could take lessons... She lost interest almost as soon as my parents purchased a used piano.. I played the piano one day and found that I could play songs "by ear". I became very very good at it and Upon graduating from College with marketing skills... I decided to become a full time performer. 18 years later, I am still a full time performer.

Oh, fantastic... "by ear" reminds me something... And how it came the idea to be an Elton look-a-like impersonator? You have been an Elton John fan before, have you?

I performed only as "Lee Alverson" for the first 11 years of my career. I released several solo CDs ...one of which consisted of original songs and was released on a national level. I had the opportunity to perform as an opening act for giants like Barry Manilow, The Beach Boys, Andy Williams, etc.. I also performed extensively as the "Phantom of the Opera" in a special Broadway revue show as well as other "Theme shows ",during the 90's. Acting and Music go hand and hand for me. I was always a huge Elton John Fan.. and as I learned to play piano-I listened to Elton's style and absorbed his technique. I also knew and played all of his songs when I was starting out in lounges in the early 90's. In 2002, I was looking on line and saw that there were thousands of Elvis impersonators and only three "Elton's" 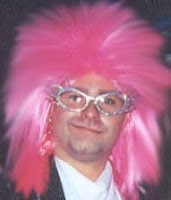 My keen capitalistic eye couldn't pass up such a huge opportunity and Since I love to act, can play piano, and love Elton John's songs and showmanship... It seemed like opportunity to do something that I knew would be fun and rewarding. To be honest, I thought that it would just be a performance here and there while I continued other entertainment endeavors. I had no idea it would snowball and get this big. Now the calls and emails constantly come in and the role has really taken over my career ...which is fine with me. I look at my tribute to Elton John as an acting role. Actor Harrison Ford is known for his role as "Indiana Jones" . Christopher Reeves is known as Superman. So far.. I am known for my role as "Elton John." and I am fine with that.

Your performance as Elton John is truly outstanding… How you prepared a “Elton's Greatest Hits” show? I mean… is there a regular band with you or always play solo? How do you manage to find such great costumes?

Thank you very much. I studied many video tapes of Elton John over and over again and listened to his live recordings over and over. I try my best to capture his mannerisms and stage antics...giving the audience a realistic impersonation. I try to include the nostalgia of Elton... with a couple different looks that he had throughout his career. The show is simply a tribute to a fantastic showman. I have several established bands that I hire to do the big shows with me. The bands are well rehearsed and know the material like the back of their hands... I am very fortunate to have such talented musicians on stage with me. When a client has a smaller budget or the event is a small surprise party etc.. I am happy to perform solo with only piano. Those shows are equally rewarding. The majority of my costumes were professionally made. I give costume designers photos of Elton's costumes and they do their magic.

Nice!!! How you choose the set list and which songs become a part of the set?

I pick the songs that are most popular and of course the ones that sound best live. You cant get away without doing songs like Bennie and the Jets and Crocodile Rock.

Have you ever been mistaken for Elton? Some funny anecdote to share with us?

No. I think that everyone realizes that it is a Tribute show and I have never had a problem with mistaken identity. I also make sure that the contract states that it is a tribute act and that the client is not allowed to pretend in any way that I am the real Elton John at the event or in any promotional way.

Yes... Again another acting role. In fact, many times a client hires me to play both characters in the same show. When this occurs, I have to do a set as Billy Joel first and then break while the band plays and I become Elton Backstage. To become "Elton" I need to put on a wig to cover my hair which is short and black (like Billy Joel) . I need to do the whole make-up thing to get into character. The years of lounge work when i was young paid off..I learned Elton's songs at the same time I was learning Billy's.

Ok! You perform at festivals, casinos, fairs, and other corporate functions across the country. And what we could do if we want to hire an impersonator celebrity, like you?

Yes. I perform for huge companies like Pepsi and Intel and play great places like The Versace Mansion in Miami, El Conquistador Resort in Puerto Rico, and The Venetian Casino in Las Vegas. I am a full time performer and all you need to do to hire me is contact me by going to my official web site: www.Alversonentertainment.com or through my Impersonators Network site: http://www.partypop.com/Vendors/4091296.htm I represent and refer a multitude of professional impersonators through this site.. I have personally worked with all of the acts and know them to be reliable and professional. I am happy to perform at large or small venues.

Also, you regularly feature in stage productions. How about these experiences and which are your future projects?

The Phantom of the Opera revue was very rewarding for me. I still play the "The Phantom" on occasion and love doing it. I am currently performing a Las Vegas Revue show called Las Vegas Then and Now which highlights the artists of VEgas' past like Sinatra and Elvis with todays Vegas stars like Manilow. I perform with a very talented singer by the name of Suzanne Lauglin. I am also producing a show called Lee Alverson's Legends of Rock n Roll which features a several other impersonators like Neil Diamond, John Lennon etc...

Fantastic!!! You also released five albums, if I am not wrong: your favourites from seven years of work on "Now and Then"; your holiday favourites on "Winter Wonderland"; the hits from Big Band Era on "Swingtime Saturday Nite”; the italian favourites on "That's Amore" and "Matter Of Time", with some of your originals. For when your Elton John Tribute Compilation, Lee?

I have recorded quite a few. I never recorded the Elton material for sale because I wouldn't want to step over the line. Performing the material live in a theatrical setting is one thing.. But I would not want to have people buying my impersonation recordings. I leave that to the REAL Elton.

You have a highly recommended website on http://www.alversonentertainment.com/ What could we find there?

You can find pictures and descriptions of all of my shows...Bio info.. downloads etc.. Everything from my Phantom act -Elton- Billy Joel-Jerry Lee Lewis impersonation- my recordings etc... Also other acts you can hire.

Someone Saved my Life Tonight, "Elton's live version of Pinball Wizard (even though he did not write it) Bennie and The Jets, Your song, The Ballad of Danny Bailey.

Well eltonites, we have here a greatest performer. Don't miss the videos of him playing Elton and be aware about his albums. I listened the songs and he's a wonderful voice. Not only is elton, he's a truly professional musician and it was my pleasure to do this interview. Thank you very much, Lee, I wish you all the best in your projects and we will foloow your career, of course.
by Jackrabbit on 12:29 pm