The Story Behind “You’re In My Heart” 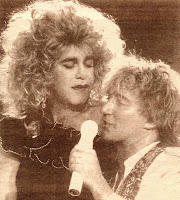 On April’s Fool day, in 1991, Elton surprised Rod onstage, in Wembley, wearing a dress and wig. He kissed Rod and sat on his legs to duet “You’re In My Heart (You’re In My Soul)”.

Judy Parkinson described the whole progress in her book “Made In England”: “(Elton) together with Rod’s management planned a trick right down to the last detail. (Assistant) Bob Haley was instructed to go out and buy a custom with all the trimmings, returning with a blonde wig, strapless gold gown with frills, and strappy shoes. Rod was expecting his wife to appear, but it was quite another blond who tottered on stage and whispered: “It’s Sharon!” (...) After Rod regained his composure, the two sang the duet, while Elton sat on Rod’s knees serving him brandy from a silver tray”.
by Jackrabbit on 11:52 am