Hi Anja. Welcome to the “Ice On Fire” Week. Nice to “meet” you. I was interested in interviewing you because I check your website about Elton and it's one very very interesting. I am sure you're a big eltonish supporter and you live in a country that still loves Elton.

So... Could you tell us, please, who are you and where are you from?
I’m 27 years old and I’m from Denmark.

Ok! When you became an Eltonite? Remember the first time you heard Elton’s music and what moves you to buy his music? 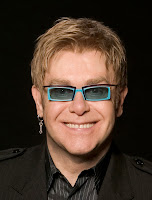 I became a fan in 1998 when I saw him in concert for the first time.. I was sold big time! I remember hearing some of Elton’s music long before I really became a fan as such. I thought it was very melodic and I liked his voice and style. Later when I got to know his and Bernie’s compositions a lot better I found a lot of things in the story’s of the songs, his piano playing (underrated!) and more. I can relate to it and it moves me.. as I think it does to many people. Also he is a fantastic live performer.

Sure! What was it like seeing Elton for the first time and how many concerts have you been? And also, have you got Elton's autograph at a show? And which are the songs, in your opinion, that he has to put in his current set list?
I have been to 16 concerts and going to 2 more this year in Germany and England. First time I saw Elton in concert was very surreal and amazing at the same time! I thought he was fantastic. I’ve got 5 Elton autographs. There is a lot of Elton/Bernie songs I would like to hear live! Grow Some Funk, Son Of Your Father, Highflying Bird, Bitter Fingers, Harmony.. and a lot more!!

Wow!! 5 autographs!!! So... Which is your Elton’s item that you really appreciate, for being hard to get or for the happiness you’ve got to have it?
Well, my autographs. A silly thing like a small stone from outside his mansion, Woodside. And I love the dolls! But they are not really hard to get.

Nice! Explain me something about your great website. What it was your pretention?
Well, I just like spending time on it and getting in touch with other fans around the world. My first intention was to put a lot of information together in one place on a Danish Elton John site, cause it’s the only one there is.

Great!!! How it was, and still is, the success of Elton in your country? Which have been his hits in sales terms? And the most sellest albums?
I don’t think that there is many “hardcore” fans in Denmark really. But he is very loved here, he sell out concerts easily and so on. And he often visits.. I don’t know much about his sales here though. But I could imagine that albums like “Goodbye Yellow Brick Road” and “Greatest Hits” are doing very well like everywhere else in the world basically ;-) Also he recorded “Sleeping With The Past” here in Denmark.

Yes, he did. Well, you know that this is the “Ice On Fire” week. What do you think about this album and what this album means for you? 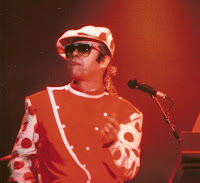 Well, I think it’s a good album but below his usual standards. I do believe that he made good songs in the eighties more than good albums as a whole, like he did in the seventies. But I love songs like “Too Young”, “Soul Glove”, “Satellite” and of course “Nikita”! Those are some of the best songs on the album in my opinion. Still it means a lot to me, all of his records does, they tell each of their story and I’ve heard them a million times.

Finally, could you tell me your five favourite Elton’s songs in running order, for my AllSongsList, please?

Thank you. Would you want to add some observation or suggestion, or something you want to say to other eltonites?
Elton rules!

Thank you very much Anja, really a pleasure to chat with you. Take care. Well, fans out there, I think we must check out Anja's website. That's http://eltonjohn.dk where you could find the setlists of the concerts Anja have seen, a complete biography, pictures, a section about Bernie, her videos on youtube...and the section which I really like it: Interviews and articles. A must to see website!!!
by Jackrabbit on 11:37 pm