The Eltonite's Day (VIII): My Special Guest Is... Marissa!!!

Hi MarissaluvsElton. Welcome to the “Elton John & Tim Rice's Aida” Week. Nice to “meet” you and thank you very much for the acceptation. Really it was my intention to interview you because I always loved your comments and thoughts about Elton, and I still remembered, you were the one who introduced me to the msb at Hercules, what it was great!!! More than this, you're so younger and, in the other hand of people of your age, you became an Elton John fan. As your experience, it's nice because Elton provided fans in the 70s, the 80s, the 90s and nowadays

But first... Could you tell us, please, who are you and where are you from?
I am Marissa from California, USA

Ok! When did you become an Eltonite? Remember the first time you heard Elton's music and what moves you to buy his music?
I became an Eltonite when I was 8. The first time i heard EJ was on the Lion King dvd (Can you feel the love tonight) i fell in love with him & his music

Nice! How many albums do you have and how you started to collect Elton's albums? Which one was the first and why?
i have about 20 albums. the first i ever got was Greatest hits 1970-2002, christmas of 2003. when i told my family i liked elton john, they thought i was kidding but then they took me seriously. 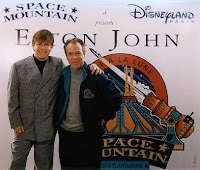 Wow!!! Which is your Elton's item that you really appreciate, for being hard to get or for the happiness you've got to have it?
His 60th B-day dvd probably.

Great! Well, you know that is the week of “Elton John & Tim Rice's Aida Sessions” Week... Do you like Elton doing musicals? Have you ever seen one of Elton's?
I never saw one of his musicals, but I’d like to see one. I think ej is great at musicals.

Which should be Elton's new direction of his career, in your opinion?
I like his career the way it is at the moment

I see... Finally, could you tell me your five favourite Elton's songs in running order, for my AllSongsList?

Electricity
The Letter
Freaks in Love
Made in England
American Triangle

Thank you very much. Would you want to add some observation or suggestion, or something you want to say to other eltonites?
You all rock. Rock on.

Oh, once you said i was listening to demo songs from "Songs From The West Coast" album on my grandma's cell phone... really you did that? Which is the story?
Well there is this thing on phones that allow you to buy ringtones. Uhh… I wasn’t buying any, even though I want to, so I was previewing each song to see what they sound like.

Thank you very much Marissa, really a pleasure to chat with you. Take care. And thank you for ginving me the opportunity to met great eltonites on msb!
Thank you Miquel!
by Jackrabbit on 3:33 pm